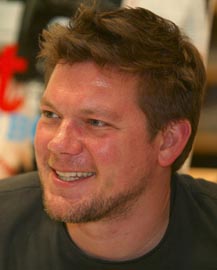 The first fan arrived before 7 in the morning. She came armed with drinks, a lawn chair and a quilting project, as well as Tyler Florence’s latest book, Eat This Book: Cooking With Global Fresh Flavors (Clarkson Potter, $32.50).

It was a good six hours before the charismatic Food Network star-chef was due for his 1 p.m. book-signing event at Williams-Sonoma in a southern California mall.

By 11 a.m., the mostly female crowd spilled out of the store, forming an orderly line next to the shop’s windows. Many had infants and toddlers in tow.

I was impressed with how patient and polite everyone was, especially inside, where small children stood in line next to tables filled with temptation. Tables topped with water-glass pyramids or elaborate place settings of gold-rimmed china. But instead of whining or fussing, the kids were calm. Not one tear was shed, nor one parental reprimand delivered.

Tyler Florence’s shows seemed to be a part of everyone’s regular routine. Maybe that at-home familiarity fueled the tranquil atmosphere.

One of three Food Network shows that showcase Florence’s talents, “Food 911” episodes feature his visits to home kitchens of viewers that have requested culinary guidance. Whether it’s problems with fallen souffles or lumpy dumplings, he comes up with workable solutions.

Most show participants look at him like he’s their culinary knight in shining armor. Oh, make that handsome culinary knight. Florence, 34, combines leading-man good looks with an easy-going-but-hip attitude.

At a desk inside, Florence signed books with a black-tipped Sharpie marker. He made the stubby pen fly across each page at cleaver-cutting speed, still managing to look into the eyes of each fan during the process.

After the signing, I asked him about his book.

He pointed out the beautiful salad photo on Page 157: A perfectly ripened avocado half rests in the middle of a white plate, rounded side down. Long strips of crisp bacon totter over a few sprigs of fresh watercress at the avocado’s heart. Simple lemon vinaigrette dapples the plate, along with a sprinkling of very coarse salt and cracked black peppercorns.

2.Cut avocados into chunks and place on 6 salad plates. Drizzle with lemon juice and olive oil. Sprinkle with salt and pepper. Scatter watercress over avocado and top with bacon.