Clem Snide: The Meat of Life 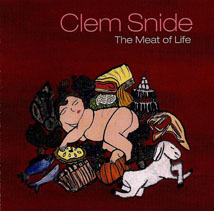 During indie-pop piece “Wal-Mart Parking Lot,” Barzelay sings how blacktop at sunrise can alleviate the pain of a midnight breakup. Cello and acoustic guitar aid in dramatizing romantic dispossession during poignant “With Nothing Much to Show of It.” “BFF,” concerning the awkward moment when friendship veers toward relationship, is prodded by electric guitar and an alt-rock inclination.

The Meat of Life doesn’t break loose from what has come before, which is fine since that provides a reliable backdrop to Barzelay’s melancholia and his emotional turbulence.


The Meat of Life is currently available.
Article posted on 3/1/2010
This article has been viewed 1430 times.