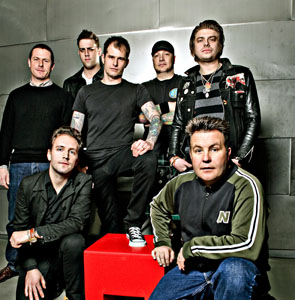 The new one from Dropkick Murphys, Live on Lansdowne, drops just in time to be the soundtrack for St. Patty’s Day fun. Hitting stores on March 16, the 20-song set was lifted from a week’s worth of shows recorded about this time last year in the band’s hometown of Boston.

You may remember that the guys put out another live recording from Boston back in 2002; Live on Lansdowne has a completely different set list that also includes a take on “I’m Shipping Up to Boston” that features guests the Mighty Mighty Bosstones.

The album will be available in several configurations: as a CD, as a double-pack with CD and HD DVD or in a double gatefold vinyl package with a CD insert. DKM won’t be in the area for a while; after they party in Boston on St. Patty’s Day they head out on a European tour.

Dinner and a Movie with Brotha Lynch Hung

Rap artist Brotha Lynch Hung has decided to give Rob Zombie a run for his money by producing a series of gory videos as companion pieces to his music. The project will unfold over the course of three concept albums, the first of which is called Dinner and a Movie.

The album’s theme revolves around a man who’s a regular guy by day but turns into the mask-wearing serial killer Coat Hanga Strangla at night; the scenario plays out in three videos titled “Meat,” “I Plotted (My Next Murder)” and “Colostomy Bag.” “Meat” is available for viewing now at coathangastrangla.com, and Dinner and a Movie drops on Tech N9ne’s Strange Music imprint March 23.

He’s been working in a Miami studio for months, and now you can hear what T-Pain has been up to all this time. Just released is Nappy Boy All Stars Vol. 1, a 25-song mixtape featuring One Chance, Young Cash, Travis McCoy, Shawnna, Sophia Fresh, Tay Dizm and, of course, T-Pain himself.

Two of the songs will shortly be released as videos; “The Manual” by Travis McCoy featuring T-Pain and Young Cash and “Point Em Out” by Tay Dizm featuring Shawnna. Visit T-Pain.net to listen to a stream of the mixtape and for info on how you can win an iPod Touch loaded with the entire Nappy Boy catalog.

The Pet Shop Boys surprised everyone last year when their Yes album spawned two No. 1 Billboard dance hits and became their highest-charting album in over 15 years. Now the guys are releasing Pandemonium, a DVD/CD set featuring their entire recent performance at London’s O2 Arena.

The DVD is loaded with extras including the Boys’ performance with Lady Gaga and Brandon Flowers at the 2009 BRIT Awards and music videos for “Love Etc.,” “Did You See Me Coming” and “All Over the World.” Pandemonium breaks out everywhere March 23.

Johnny Quaid Is the Ravenna Colt

Former My Morning Jacket guitarist Johnny Quaid has released a debut album with his band, the Ravenna Colt. Slight Spell has actually been in the works for quite awhile; Quaid conceived the idea for the Ravenna Colt project over a decade ago, but he had some things to work out before bringing the album to fruition.

First was a six-year stint as a member of MMJ that ended amicably in 2004. A move to California ensued, but Quaid’s deep affection for home eventually drew him back to his native Louisville, Ky., where he not only finally saddled up the Ravenna Colt, but co-founded the band’s label with former MMJ bandmate Jim James. Slight Spell is available now from Removador.

If you’re a bird watcher you might know that the ortolan is a tiny songbird found primarily in Europe. Ortolan is also a group of four songbirds from New Jersey that can often be found alighting in coffeehouses.

Sisters Stephanie, Brianna and Jill Cottingham and sister-in-law Lara are Ortolan, and their latest effort Time on a String has just dropped through Sounds Familyre. Local tour stops should be announced soon at ortolansong.com.