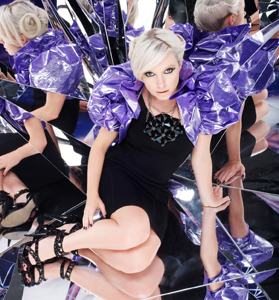 The year officially belongs to electro divas ready to wreak havoc in pop music with club anthems. From monster-loving Lady Gaga to the fiercely androgynous La Roux, everyone wants to just dance in their best Grace Jones getup while expressing themselves like material girls. Joining the club is 25-year-old Victoria Hesketh, “Little Boots,” a five-foot, sassy blonde who’s set on making her own British invasion.

While many believe that her name comes from Caligula, the crazed Roman emperor obsessed with sex, it simply notes that she has small feet. However, Little Boots’ claim to fame isn’t as straightforward.

Before the disco ball couture, “Jetsons”-esque musical gadgets and European chart-toppers, the Blackpool-born singer-songwriter was just another aspiring artist posting YouTube videos singing covers of Madonna in her pajamas.

“I was always singing and started playing piano when I was 5, so music has always been an integral part of me,” she states.

So what does a tiny singer do other than jumpstart her career on the Internet? Join a rock band, of course. Back in England, many recognize Hesketh from being the brunette frontwoman of Dead Disco, an all-girl indie group that would pave the way for her musical journey as Little Boots.

While the trio shared a love for Duran Duran and Blondie, Dead Disco officially announced on their MySpace blog in December 2008 that the group had disbanded.

It was at this time that Hesketh realized her true love couldn’t be denied. She soon transitioned to electronica, the musical genre made for nightclubs that would forever change the sound of pop a year later.

“It wasn’t really a conscious decision,” explains Little Boots. “I just started writing, and that was where the songs felt like they needed to go. I think also the fact that I don’t really play guitar and have played synthesizers for a long time definitely shaped the sound as it was the tools I had around me; it’s what I can play.”

After leaving Dead Disco, Hesketh flew to Los Angeles to start her new journey as Little Boots, with the guidance of Greg Kurstin, the writer-producer behind the best-selling hits of music’s leading ladies, including Britney Spears and Lily Allen.

“It took me a while to get L.A., but now I love it and have quite a few friends out there,” she says. “I love working with Greg in his home in Los Feliz. He was extremely influential in giving me confidence in my songwriting. I just try and learn something from everyone I work with and hopefully take that away and become a better musician from it.”

Along with the aid of music’s elite, including Hot Chip’s Joe Goddard and RedOne from Lady Gaga’s The Fame, comes Little Boots’ first solo album, titled Hands. The result is a smoky-eyed platinum blonde decked in glitter and gold, revealing ultra sultry vocals that are as sugary sweet as her stiletto stomping, glitzy nu-disco sound that’ll have you in a daze on the dance floor.

Her hit single “Stuck On Repeat” literally has listeners pressing play over and over, as if she’s hypnotizing them with each breathy lyric. “New In Town,” inspired by her days in Los Angeles, is a feel-good pre-party anthem, whereas “Magical” is a throwback favorite that’s playful, haunting and the ideal soundtrack for a discotheque in outer space.

“I guess the influence of disco is inescapable, especially in dance music, but I can’t really see a total comeback as that would be boring,” says Little Boots. “Music is only exciting if it combines parts of the past and makes something new for the future.”

Nevertheless, Little Boots’ DJing skills have greatly influenced her as a star in the making.

“DJing definitely helped me learn a lot about dance music and how it all fits together in a club,” says Little Boots. “It’s so different from where you make it at home, or in the studio. Hopefully, we’ll be playing a few after parties on the tour. We’re just waiting to confirm.”

Little Boots has already conquered music charts in her native England and her next step is taking over America. Little Boots does acknowledge that the media is comparing her to Lady Gaga, but she isn’t worried about being another It-girl. Her goal, as always, is to make music.

“I don’t really think about trying to stand out,” she says. “I just do what I enjoy and don’t worry about comparing myself to other artists. Everyone should get on with their own thing. I just find trying to write the perfect three-minute pop song that can connect with different people more difficult than making 20 minutes of white noise … but maybe that’s just me.”

As audiences anticipate intergalactic stage shows and Little Boots’ mastery on the Japanese Tenori-On instrument, she already has her heart set on exploring America

“I’m looking forward to seeing all the places I’ve never been and getting to know the ones I have even better. And pancakes.”

Hands is currently available. Little Boots will perform March 10 at the El Rey, March 12 at the Glass House and April 18 at Coachella. For more information, visit littlebootsmusic.net.