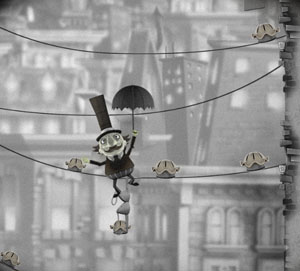 USC grads give us "The Misadventures of P.B. Winterbottom."

As any long-time reader of Games & Gadgets may know, we support the underdogs. Perhaps the overwhelming urge to see the unlikely hero take on nearly impossible odds to reign victorious is just a symptom of being a gamer, but there is always that extra little swell of pride when a relative unknown outshines its flashier, better-funded competition. Whenever we can help these smaller titles grow, we jump at the opportunity.

A couple of years back, this section did a feature on the then-new Interactive Media MFA program at the University of Southern California. USC had taken the bold step of offering a master’s degree program that was basically centered around making video games (as well as other interactive art) so it seemed like a perfect fit. The sheer variety of unique thesis programs – from interactive films to three-dimensional virtual music makers – was almost as amazing as the fact that these programs were all coming from students in our neighborhoods.

Now, years later, we see that the newer crop of USC Interactive Media graduates have made good in a big way. Matt Korba and Paul Bellezza, two 2008 graduates from the MFA program, have formed their own independent game studio known as the Odd Gentlemen. Their first big title – “The Misadventures of P.B. Winterbottom” – is out on the Xbox Live Arcade store, and it is a very strong showing.

“The Misadventures of P.B. Winterbottom” definitely lives up to the standards you would hold any game made by a group that calls themselves the Odd Gentlemen. This Xbox Live Arcade-exclusive game plays out as a side-scrolling platforming puzzle game, but the first thing that will strike the player is the unique silent movie-inspired graphics, music and inter-level narration cards. The black-and-white world of P.B. Winterbottom is turned upside down when the infamous pie fiend finds a time-bending pie and bites off more than he can chew.

Of course, the fact that time paradoxes, and that there are other nasty side effects of stealing this temporal pie, doesn’t seem to slow the short, top hat-sporting pastry addict. By learning how to control time in various unique ways, the player guides Winterbottom and his temporal clones to collect all of the pies within a stage. Once the stage’s puzzle has been solved and P.B. has more than his rightful fill of pies, it is time to move on to another stage with even more pies.

While the controls are amazingly simple for a time travel title, the difficulty ramps up almost immediately. Soon, you will find that just making a clone is not enough. You will have to create and destroy multiple clones (many of which will be burned, frozen or disintegrated), within amazingly short time frames. Of course, the game takes yet another twist when your powers begin to get strange and the clones start to turn on the admitted antihero.

If our local heroes can be criticized for anything, it is that “The Misadventures of P.B. Winterbottom” is far too short. Sure, it’s an Xbox Live title, but the adventures – complete with amazingly snide narration cards and amazingly cute drawings – feel like they need to be expanded into an even longer title. Maybe it is just because the gameplay is so much fun, but it feels like the game could easily have been twice as long and it would still be a quick play.

Admittedly, considering that Los Angeles has long been one of the great entertainment industry capitals of the world, it is not so strange to see a young studio popping up in our fair county. Still, consider the fact that these two graduates from a truly unique program aimed at elevating game designers are from our backyard. If we can’t support our local talent, then there really is no sense of camaraderie left in this city.

That said, local pride is not the only asset that “Winterbottom” has going for it. The game lives up to the art-based multimedia MFA program with gorgeous images, sound and storylines. It is a very unique experience that may be over too quickly, but only because it is just that much fun to play.