Technocheating: Cheaters Use New Array of Gadgets to Get that ‘A’

By James A. Fussell 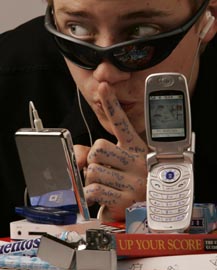 Scribbling notes on your hand or peering at another student’s test? How old-fashioned. Today’s cheaters use scanned paper candy wrappers, MP3 players and camera phones.

Every year, especially during the pressure of finals, certain students take a time-tested academic shortcut: They cheat.

And while cheating is nothing new, the way some are doing it is. Crib notes? Peeking at someone else’s paper?

Today’s well-equipped cheater is armed with high-tech tools that have ushered in a new age of digital deception. Even as schools have started using technology to fight an epidemic of downloaded papers and cut-and-paste plagiarism, new threats have arrived:

Camera phones can take and transmit pictures of tests or send silent text messages to request or provide answers. MP3 players can hold downloaded notes as easily as they can hold music.

Scanners and computer editing programs can turn the ingredients section of candy wrappers into customized cheat sheets. According to reports in technology magazines, Mentos is often used because of its long paper label, which can be unrolled, flattened and easily scanned.

It’s unclear whether cheating has grown with technology. But technocheating will only worsen as digital technology gets smaller, cheaper and into more hands. Last year, 36 percent of U.S. cell phones had a camera, according to technology research firm IDC in Framingham, Mass. That figure is expected to jump to 55 percent by the end of this year, and reach 87 percent by 2009.

One of the worst cases of technocheating came earlier this year in Sugarland, Texas. A 17-year-old student placed a keystroke decoder on the back of a teacher’s computer. The device logs everything that’s typed, including passwords. The result: The boy stole and sold the teacher’s tests. He was caught and charged with a misdemeanor.

“It’s a matter of plugging it in. Takes 10 seconds. And who looks at the back of their computer? We sell 256-megabyte flash drives for $28, well within a student’s budget.”

Rich Cavallaro, manager of information services for Shawnee Mission schools in Kansas, said his district has protected itself.

“We do everything within our power as far as safeguarding the environment,” he said. “We do not allow students, or anyone, to install executable programs such as key loggers. We have locked down the systems so that the user cannot boot up the computer from a flash drive.”

But nothing, he said, can replace diligent monitoring by teachers.

“I don’t think the ingenuity of our students should ever be underestimated,” he said.

Shawn Bowers, now a 19-year-old college freshman, said some students at Shawnee Mission (Kan.) North High School programmed answers into their graphing calculators, which can store words as well as numbers. They either found excuses to use them during tests, “or they’d pop it out of their backpack, look at it, then throw it back in,” he said.

Last December, Steve Yanda, a senior at Rockhurst High School in Kansas City, Mo., wrote a story about cheating for the school newspaper. In an informal poll of 400 students, 73 percent admitted to some form of cheating. Several students told him they used text messaging to cheat on tests.

“It’s hard for teachers to know because most of the time they are not staring at the students,” Yanda said. “They’re working on something else or grading papers.”

Rockhurst assistant principal Larry Ruby said he hasn’t seen any cases of technocheating, but promised swift punishment for any that arise. A first offense earns a zero grade and a letter to parents. A second offense: probation. A third instance could result in dismissal.

Deb Pontier, a math and computer programming teacher at Shawnee Mission East, doesn’t think technocheating is widespread. But she can’t be sure.

“I haven’t seen a lot of it, but I don’t know if they are just better at hiding it than we are at finding it,” she said.

She has had some problems.

“I’ve seen kids who have saved files on computers in order to cheat,” she said. “They can change settings that you don’t know they can change. Or somebody else can pull the program up and use that to cheat. It’s very hard to catch.”

Christy Darter, a science teacher at Raytown High School in Raytown, Mo., said students have always found innovative ways to cheat. Technology is just the latest. The best defense against cheating of any kind, she said, is good teaching. It’s easier to steal answers for multiple-choice tests. But tests that require students to apply a depth of knowledge make cheating far harder.

“Don’t give them an opportunity to cheat and they don’t cheat,” she said.

Many schools have taken steps to deal with the most common form of technocheating – using the Internet to download or plagiarize papers. Many teachers now require students to submit papers to sites such as turnitin.com, which compares papers with those found on the Internet for similarity. Tim Dodd, executive director of the Center for Academic Integrity at Duke University, says that’s not enough.

“We will do a poor job if the only approach we try is to win the arms race – fight their technology with our technology,” he said. “We have to go back to a fundamental point: why honest behavior in the classroom and honest scholarship outside the classroom (matters). I am not as concerned about the changing technology as I am about the changing messages that students receive, that they have to get the best grades to get into the best schools to get the best jobs.”

“I’ve never seen anyone put their GPAs on their tombstone,” he said. “You know, ‘Here lies Larry, 4.1.’ That’s not what matters at the end of life. It matters what kind of man or woman you were.”