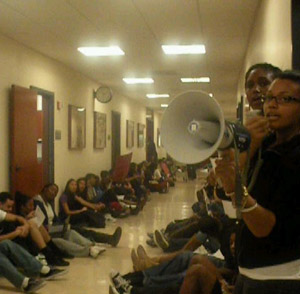 An institution continues to be in crisis as angry, underrepresented students stand in protest of the recent events at several UC campuses, all in the wake of Black History Month.

On Feb. 25, a noose was found hanging on the seventh floor of a UCSD library. A blatant symbol that has been described by California State Law as a form of “racism and lynchings for many African Americans.”

This recent act has spurred criticism by students all across the UC system, including a peaceful march and sit-in of over 100 students at UCLA.

On Feb. 26, students at UCLA stood in solidarity with their sister school, as the African Student Union and other students of underrepresented ethnicities shouted in front of Chancellor Gene Block’s office at UCLA’s Murphy Hall. The front of his office was closed tight by heavy glass doors where two UCPD officers stood guard. Inside, curious secretaries nervously watched as students shouted outside, “No justice, no peace” and “Come out, Block.”

Their demands included an endorsement from the chancellor for the expulsion of the student who hung the noose, the idea of having a diversity requirement on UC campuses and criticism of UCSD administration’s lack of response. With a bullhorn in hand, students lined the long hallway waiting for an answer from their chancellor, one student was in tears as she spoke to a University official.

An hour into the sit-in, Chancellor Block came out to read a joint statement by all UC chancellors that would be later released to all students and staff of the UC system. The statement read: “We will not allow the actions of a few to speak for this university. We denounce them.”

Chancellor Block also said that UCSD’s Chancellor Marye Anne Fox is “overwhelmed and deeply disturbed” by the events at UCSD, and stressed that he is in no position to change policy at their sister school.

Such events are recent reactions to a slew of racially charged activities throughout the UC system. The discovery of the noose came just two weeks after a Facebook invitation at UCSD titled the “Compton Cookout” received national media attention.

The invite urged partygoers to dress and act in what was deemed as “ghetto” attire. Black women were especially offended by the descriptions of “ghetto chicks” – “gold teeth, start fights and drama and wear cheap clothes.” It goes further to include “nappy hair” and a “limited vocabulary.”

In addition, the Koala, a campus news program was suspended of student funding after one of its broadcasts defended the Facebook event using the words “ungrateful n*****s.”

UCSD’s Black Student Union and other supporters have blasted school administrators and Chancellor Fox for not taking enough action.

On Feb. 22, UC Irvine student Hanna Gunthie wrote an opinion piece in the school’s student newspaper criticizing the need for a Black History Month. She wrote, “This is not to say that I am ignorant of or naïve about racists within our society, but racism no longer characterizes society as a whole. I would argue that focusing on everyone’s ethnic background – American-born or not – in the form of club organizations and holidays is racist because all it seeks to do is give preferential treatment to self-segregating groups whose main purpose is to cry eternal victimhood.”

The article has received well over 100 responses and continues to grow daily. The replies are diverse (though mostly negative toward Gunthie), ranging from topics of freedom of speech, affirmative action and the use of the word “African-American.”

A long battle between University of California and race isn’t new. Since Proposition 209 was passed barring affirmative action, the New York Times reports that 3.8 percent of all students enrolled at UC schools are black. At UCSD, blacks comprise two percent.

In 2009, UCLA admitted 12,098 freshmen, 407 (or 3.5 percent) of which were black. In total, 18.6 percent of all underrepresented communities (which also includes Native Americans and Latinos) were admitted.

Since these events, the person responsible for the noose has been expelled, but for students across the UC system, this issue does not end here. After their meeting with the chancellor, students at UCLA held a debriefing to continue to stand in solidarity with UCSD and other UC schools to continue the fight.