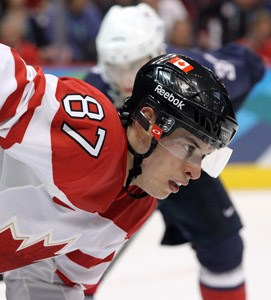 So it was not the French and Indian War, but Sunday’s Men’s Ice Hockey Gold Medal match at the just-concluded 2010 Vancouver Games that will go down as one of the most memorable battles in international sport history. For the final five minutes of the third period and the 7:40 played in overtime, the American and Canadians skated around the ice rink at General Motors Place as if their collective lives depended on it – with fervent fans in both countries emotionally taken hostage.

Fittingly, it was Canada’s Sidney Crosby, the NHL’s golden child and symbolic savior, who allowed the Canadians to exhale and forced the dejected Americans to accept the Silver. Indeed, anyone expressing zero excitement in the time between Zach Parise’s game-tying goal with less than 25 seconds remaining and Crosby’s game-winner eight minutes later was clearly not watching hockey, as there is almost nothing else in sport capable of providing greater drama.

As America’s Ryan Miller fell to his hand and knees as the country of Maple Leaves, Mounties and Molson beer celebrated on its home turf, an interesting question was posed to sports fans in the United States. Was the game dramatic enough to convert casual hockey fans into steady followers of the NHL?

Ideally, the answer is yes. As many of the players who skated on Sunday return to their respective teams this week to resume NHL play, the hope is each of them has become a household name while planting seeds to draw casual fans to watch the remainder of its season.

Thankfully, with playoff races heating up left and right and the Stanley Cup Playoffs already known for its dramatic games, the NHL needs the play over the next three months to equal or surpass the captivating drama of Sunday’s Gold Medal. If the NHL cannot capitalize on the gripping emotion its own players delivered at the Vancouver Games to attract casual fans, then the league will never be taken seriously outside of Canada and the American northeast.