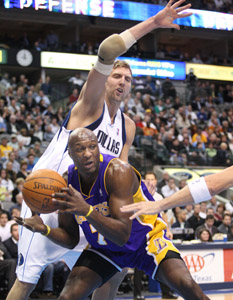 The No. 1 in the west Lakers (45-15) travel to Florida and North Carolina this week to face three Southeast Division teams.

First, they play the 29-31 Heat in Miami Thursday afternoon. When the Lakers hosted the team, led by 2010 All-Star MVP Dwyane Wade, back on Dec. 4, they barely eked past the Heat by one point due to a 3-point buzzer beater by Kobe Bryant.

On Friday, the Lakers battle the 28-29 Bobcats in Charlotte. And two days later, they square off against 40-20 Orlando. The Magic sit at No. 2 in the east and always provide a challenge for the L.A. squad.

The Lakers return home on Tuesday to play the 31-27 Raptors at Staples Center where they barely beat the 22-36 Philadelphia 76ers 99-90 last Friday. Staples was also the setting for the pivotal Feb. 28 game against the No. 2 in the west Nuggets (39-20).

The match served as a preview of a certain playoff series between the two squads, and the Lakers were out to prove they deserve the top spot in the conference after their Nov. 13 (79-105) and Feb. 5 losses to the Nuggets (113-126). However, it was Denver who started the game with passion and aggression, leading by as many as 13 points.

Then, in the fourth quarter the Lakers made their move. Bryant garnered a season-high 12 assists event though he shot only 3-17. Lamar Odom came off the bench to put up 20 points and 12 boards. And the Lakers finally achieved a victory over Denver this season with a final score of 95-89.

All stats as of March 1.