The Adderall Culture: Are students using or abusing the drug as a study-enhancer? 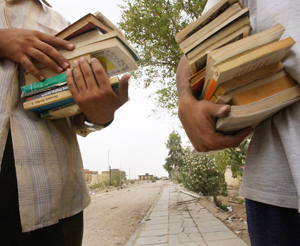 The first time Chase, then 16, tried some of his friend’s prescription Adderall, an amphetamine, he felt nothing. Then he saw the clock above his bed early the next morning and realized he had stayed up all night reading Moby-Dick cover to cover. Now in his second year at the University of Southern California Gould School of Law, Chase uses his prescription for Adderall to pull off the 12-hour days he spends studying in the library to make competitive grades, especially during finals.

As academic competition increases at colleges across the United States, students like Chase are using prescription mental stimulants typically used to treat Attention Deficit Hyperactivity Disorder (ADHD) as a study aid to cope with the pressure, or to gain an advantage over other students. Some are using them just to get high and party.

At some colleges, more than a quarter of the students are illegally using prescription stimulants, according to a 2005 study conducted by the University of Michigan Substance Abuse Center. A 2006 study published in the journal Pharmacotherapy showed that Adderall, an amphetamine-dextroamphetamine combination drug, is the most popular mental stimulant used illicitly by college students. Three fourths of students using these drugs choose it over other ADHD drugs like Ritalin and Dexedrine.

This illegal drug use is growing. At Purdue University in Indiana, a 2008 study showed that while students’ drug and alcohol use had declined over the past two years, their Adderall use had increased.

Mike, a 22-year-old who attended the University of Chicago until taking a leave of absence this year, says the students there using Adderall or Dexedrine tended to fit into a certain category.

“They were trying to make the grade,” he says. “They were met with this completely unlivable workload, so they took the drugs to get into med school or law school, to make their parents proud.”

The University of Michigan study confirms Mike’s idea that mental stimulant users often fit a mold. White men, especially those in fraternities, are the most likely to take prescription mental stimulants. Women in sororities are more likely to use stimulants than women not in the sorority system. The study also noted, “Rates were higher at colleges located in the north-eastern region of the US and colleges with more competitive admission standards.”

Blaine, an undergraduate business student at the University of Southern California and a fraternity member, says that he and “a decent percentage” of men in his fraternity use Adderall without a prescription. Both he and Mike explain that it’s easy to get Adderall on their campuses – “a kid prescribed 60 pills will sell half the bottle,” Mike says.

Depending on its dosage, one Adderall pill sells for $10 to $20. For Blaine, Adderall is worth the cost.

“It guarantees an A with one night of studying, no joke,” he says. “You don’t move or eat. You love that book. You know everything by the time it wears off.”

But he admitted using the drug to study can have a negative impact on his well-being.

“I overdosed once,” he says. “You become really sensitive to light, and you have cold sweats; you turn white; the ground becomes like liquid. Because you’re never hungry, I’d barely eaten anything for three days; it was like three midterms back to back. I was stressed and emotional. I yelled at [my girlfriend] for the first time. I studied probably 30 hours in three days. But I got three As.”

Although Blaine has never used Adderall to get high, he says some of his fraternity members do.

“I know a few guys who have drank on [Adderall],” he says. “They say you can’t black out, and you remember everything about the night.

“The five-milligram instant one, which you can snort, lasts a few hours, and you can drink as much as you want,” he says.

Mike, the University of Chicago student, also admitted to using Dexedrine to party. He has a prescription for it after being diagnosed with ADHD when he was eight years old. But Mike said he enjoys the euphoric high Dexedrine gives him.

“One of my friends actually took Dexedrine, and turned it into meth. There’s no difference between drugs like these and illicit drugs,” he says.

The University of Michigan study found that students who illegally use prescription drugs are more likely to use other illicit drugs. Mike and Blaine are not exceptions: Mike mentions using drugs like cocaine and ecstasy; Blaine says he smokes marijuana regularly.

Kelsey, a fourth year Politics and English major at Princeton University, an Ivy League college that fits the University of Michigan’s criteria for a school with competitive admission standards, says she has never taken Adderall.

“But oh my God, so many kids at Princeton use Adderall,” she says. “It’s not because they’re just trying to party; it’s just because there’s so much pressure, especially with the grade deflation. There’s so much competition. That’s why they do it.”

In interview after interview, college students rave about the academic benefits of using mental stimulants, with or without a prescription. The culture of illegal mental stimulant use, especially that of Adderall, is pervasive on campuses. If you’re a college student, you most likely have either tried Adderall or you know someone who has.

Even academics are embracing these mental stimulants. In a commentary in the academic journal Nature, two Cambridge University professors recently discussed the potential of cognitive-enhancing drugs, noting that several of their colleagues use prescription mental stimulants to fight fatigue and to improve mental potential.

But James Swanson, a University of California at Irvine professor who specializes in ADHD research, says college students and academics who use ADHD drugs like Adderall as study aids have got it all wrong.

“There’s no good evidence that shows that [mental stimulants] help college students who use them to stay up to study, or for competitive reasons,” Swanson says. “Stimulants like Ritalin and Adderall make you think you’re doing better, but you aren’t really. You can have a slightly euphoric effect, which makes you think you’re understanding and doing things better, but it’s self deceptive.”

“I wouldn’t recommend anyone to use [mental stimulants without a prescription],” he says, cautioning that unsupervised use of prescription amphetamine-based drugs can be dangerous.

He estimates that about 20 percent of individuals using these drugs illegally could have problems becoming addicted to them. When taking them in higher doses, as Blaine did when he says he overdosed, “they might produce psychosis,” Swanson says.

“Compared to [drinking] caffeine, there isn’t much of an advantage, but there are increased risks,” he says. “If you want to do better in school, drink coffee.”

The large number of college students using Adderall and swearing by its academic benefits makes it clear that there’s a need for more research to explore the discrepancies between the anecdotal evidence and the results of scientific studies so far. If the cognitive enhancement of mental stimulants is an illusion, why are students succeeding enough on these drugs that they continue to take them?

And what if, as the students who use them insist, mental stimulants do improve some individuals’ academic game? What are the ethical implications? Does it give them an unfair advantage over their law-abiding, non-drugging peers?

Stevi, an undergraduate at the University of California at Santa Barbara, says she tried Adderall once but that it didn’t do anything for her. But she doesn’t think there’s anything wrong with other students benefiting from it academically.

“People do different things; people have different regimens,” she says. “A lot of people drink coffee. You should do whatever makes you focus.”

Swanson is opposed to illegal mental stimulant use because, among other reasons, when used under medical supervision to treat ADHD, the drugs “have a tremendous benefit for some kids. But when you misuse them, it makes it harder and harder to maintain them for clinical use.”

Shlomo Sher, an ethicist who works with the University of Southern California Levan Institute for Humanities and Ethics, is fascinated by discussions about the ethical implications of cognitive enhancement. If Adderall really improves academic performance, “is it cheating to take enhancers in pre-med courses where you’re graded on a curve? Maybe. It seems like a likely candidate,” he says.

“Is it a good thing, students using Adderall? Probably not,” Sher says. “But all questions of enhancements are in a gray area. We shouldn’t treat the question of enhancement as wrong across the board in every situation.”

[Ed. note: Several last names in this story have been omitted because students were uncomfortable discussing their illegal prescription drug use on the record.]