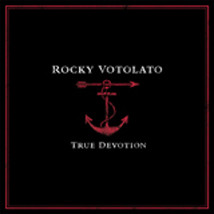 Returning to his stripped-down acoustic leanings for his latest album, Seattle’s Rocky Votolato shows with True Devotion that he’s set to be the reigning musical heartbreak king. And much in the same vein as fellow punk-to-acoustic converts Dallas Green, Dustin Kensrue and Chuck Ragan, Votolato knows how to use a minimum of instruments for the maximum aural impact.

Sonically, Devotion feels a return to 2006’s Makers, with Votolato letting his soulful vocals do all the work to convey the complex emotionality of his songs. While Votolato’s artistry is indeed nearly unmatched when it comes to intelligent songwriting and emoting, the vibe of Devotion is a bit of a bumout from start to finish without any of the more anthemic and upbeat tracks that livened up his 2007 album, The Brag and Cuss. Just by the nature of Votolato’s tonality, each word he croons carries an implicative importance and urgency, making even the optimistic songs wrench your emotions for all they’re worth.

But then, that’s kind of why he’s worth your while.

Votolato has surely treaded this path before, but much to his credit, he knows how to navigate this path like a tatted up, indie-folk Bear Grylls.