“The Ballad of Emmett Till”: Now-May 30 @ Fountain Theatre 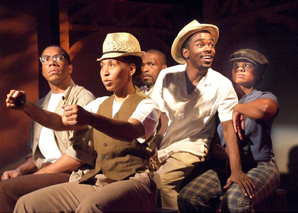 The reason I like theater is because it feels like you are locked inside the television set and watching a story unfold. This story is called “The Ballad of Emmett Till,” and it’s about a 14-year-old African-American boy who, in 1955, was murdered in Money, Miss. Till wasn’t just murdered, however, he was severely beaten and had his eye gauged out before being shot in the head and thrown in the river. His only crime was whistling at a white woman, thus the shock and anger of this event was felt worldwide and has been said to be the catalyst for the Civil Rights Movement.

Till’s life inspired many, including playwright Ifa Bayeza and director Shirley Jo Finney, who, in dramatizing the boy’s life, offer up the human side of this historical figure. It’s an understatement to say that Bernard K. Addison, Rico E. Anderson, Lorenz Arnell, Adenrele Ojo and Karen Malina White, who play multiple characters, re-enact the last days of the civil rights icon in this fast-paced and greatly theatrical 90-minute play. Through lyrical language, bits of humor and a lot of fearless theatrics, the past is magically brought to life. The result is a talkative, swaggering, fighting Emmett Till, who shows us the fragility in our humanity and the potential we all hold for change – as he accidentally hits on his cousin and chews bubble gum.

The whole play is powerful. It’s an incredible showcase of the human spirit and its resilience. At times, the play is emotionally wrenching. Unjust events will anger you while the overt racism and brutality that fueled them will horrify you. All the while, it’s important to remember that this dramatized account that Finney directs – this one day – actually happened here in the United States. So many times we forget that these things occur, and so to be virtually locked in a room (mind you, there is no intermission or changing the channel) and made to watch this play sort of unsettles you, but also leaves you with that feeling of power one gets only after facing a hard truth.