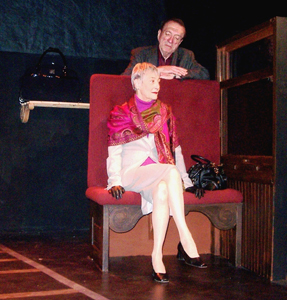 I was really looking forward to seeing “The Unexpected Man” for a few reasons. The first being that I had never been to the theater space before, which I found to be quite small, yet perfect for this particular play. Second, because of Yasmina Reza, the incredibly talented French playwright whose other play “God of Carnage,” currently playing on Broadway, won the 2009 Tony Award for Best Play. Third, the story of “The Unexpected Man,” which takes place on a train from Paris to Frankfurt, when a woman sits next to the famous author of the novel she is reading. She battles internally whether or not to take the novel out of her bag in hopes that he will start a conversation with her.

The characters speak mostly through monologue about past events and how the novelist, Paul Parsley played by Ronald Hunter, has inspired and challenged Martha’s, played by Judy Jean Berns, life. The play itself, although quite melancholy, was beautifully written and poetic.

However, I struggled with the performances. Hunter, already playing a sulky character, was monotone in his delivery, lacking versatility in his choices for his character. You loose interest in him rather quickly. Berns was better; yet their chemistry was hard to believe.

The set design by Chrystal Lee, although minimalist, had a very warm and open feel to it. Still, the two panels in the background projecting images throughout the play were a distraction and used to overcompensate for the weak performances. As a theatre enthusiast, it is disappointing to see great potential fall short.