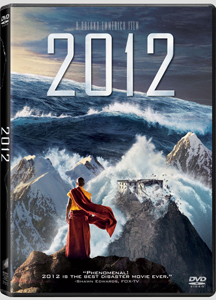 You knew all that Mayan end-of-the-world hoopla was going to be a big budget Hollywood blockbuster eventually, and here it is, courtesy of disaster film maestro Roland Emmerich. 2012 is an over-the-top special effects feast of global devastation. It stars John Cusack, Amanda Peet and Woody Harrelson as a disparate group of individuals trying to survive. Fans of Emmerich’s previous spectacles The Day After Tomorrow and Independence Day won’t be disappointed.

Megalomaniacal director Troy Duffy (see the doc Overnight) finally gets back in the ring with the follow-up to his cult hit of Irish vigilante brothers in The Boondock Saints II: All Saints Day. The sequel finds the MacManus brothers returning to Boston to settle the score when their beloved neighborhood priest is murdered by the mob.

Vol. 13 of the Forgotten Noir series contains two little-seen gems that aren’t exactly noir in the strictest sense. Breakdown is a story of a boxer and ex-con (William Bishop) who, on the eve of his biggest fight, locates the man who can prove he was framed for the crime of which he was convicted. Eye Witness is a British courtroom drama directed by and starring Robert Montgomery.

In Plain Sight: Season Two follows a U.S. Marshal (“West Wing”’s Mary McCormack) who is in charge of relocating people in the Witness Protection Program while juggling a complicated personal life and dodging bullets. It’s a smart blend of action, character and comedy.

Premiering in 1982, Matt Houston: The First Season follows a rich oilman and cowboy whose hobby happens to be solving murders. Now a P.I. in Los Angeles, Houston uses his extensive resources and the help of his good-looking lawyer sidekick C.J. to bring the bad guys to justice.

The classic TV western “Have Gun Will Travel” returns in the Fourth Season, Volume One. Richard Boone is Paladin, a gentlemen and gun for hire. Based in San Francisco, Paladin answers the call for justice wherever it takes him.

Lewis Carroll’s Alice in Wonderland struck a chord with the LSD-fueled ’60s. It’s fitting then that one of the best versions of the book is the BBC’s 1966 adaptation starring Peter Sellers. Ravi Shankar provides the score! Also included on the DVD is the 1903 silent film version.

Originally adapted by Hitchcock as a comic mystery, and soon to be an American remake, the BBC version of The 39 Steps is more faithful to John Buchan’s classic novel. Rupert Penry-Jones (“MI-5”) stars as Richard Hannay, an average man who finds himself in possession of a top-secret notebook on the eve of WWI and on the run from German and British forces.

In a twist on the usual close encounter story, the human is the weird-looking and feared alien when he visits Planet 51. Unfortunately, the green creatures of Planet 51 think Chuck the astronaut (Dwayne “The Rock” Johnson) is part of an invading human army. He teams up with an alien teen (Justin Long) to get back to his spaceship in one piece. It’s a fun family comedy. Gary Oldman and Seann William Scott also provide voices.

Two beloved fantasy classics come to Blu-ray. Before seeing the big screen update, check out legendary special effects master Ray Harryhausen’s original Clash of the Titans. The rollicking adventure based on Greek myth stars Laurence Olivier and Maggie Smith. But the real star is Harryhausen’s stop-motion wizardry. Included is a 40-page booklet and a conversation with Harryhausen.

One of the best of the many fantasy films of the ’80s, The Neverending Story follows a lonely boy who stumbles on a mysterious old book and finds himself becoming a part of the story as he reads. Soon, he is transported to a mythical land where a mysterious “Nothing” is devouring the world and the only hope is a young Native American warrior.