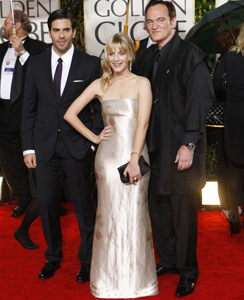 With midnight screenings of cult classics like Harold and Maude or bimonthly exploitation Grindhouse films, the New Beverly Cinema has been serving the public at large since 1978. At least, that was the year the Torgan family first turned it into the successful movie house it is today.

But in the mid-2000s the theater saw declining ticket sales coinciding with the rise of the DVD and the popularity of home entertainment. Family patriarch Sherman Torgan, who operated the venue, would have lost the business had it not been for a basterd.

You heard me right: An inglourious basterd saved the New Beverly Cinema. Famed writer-director Quentin Tarantino heard through fellow print collectors and projectionists about the theater’s financial woes and committed 5,000 big bucks per month to keep the 200-seat venue for independent, classic and foreign films afloat.

“When I give, I like to give to something personal to me,” Tarantino tells Vanity Fair Magazine. “I just couldn’t live with myself if that theater shut down while I could do something about it.”

And boy, did he do something about it. The famed director began cutting checks to keep the place alive.

When Torgan passed away in 2007, the theater (originally built in 1929 as a first-run movie house) became an item virtually up for grabs. Sherman’s son, Michael, was left in charge, but due to amounting debt, it wasn’t looking good for the house of movie auteurs and compatriots. The landlord had other buyers bidding for the space, which might have been developed into a Supercuts, as the clever Tarantino gesticulated. Thank goodness the famous name loves the theater as much as everyone else.

Tarantino is now the proud landlord of one of Los Angeles’ few safe havens for retro, classic and alternative films. He bought the theater outright so that it would never have to worry about closing ever again because it is a historical site that has meant so much to Angelenos since its early days.

Conveniently settled in the Fairfax district, the theater became a place of nostalgia for many established filmmakers who relied on the screenings to act as a classroom of sorts. It was often the only place they could catch vintage copies of Dario Argento’s Opera and Suspiria, or an Alfred Hitchcock double bill.

Tarantino was one such student. In fact, when Sherman Torgan began to regularly show Reservoir Dogs at midnight screenings, Tarantino was so honored that he brought the entire cast of the film for a spontaneous Q&A.

Before filming his most recent success, Inglourious Basterds, he wanted actress Mélanie Laurent to really understand her role as a projectionist and get into character. He trained her in the New Beverly’s projection room on a classic 1940’s Simplex XL projector, going so far as to test her by having her prepare the film for a screening of Reservoir Dogs.

Now that he’s the big man at the theater, does he see himself stepping up and taking on more responsibility, and will he make changes to the beloved landmark? The answer is: probably not.

“Right now, I’m pretty much just the landlord,” says Tarantino to Vanity Fair about not ruining a good thing. “I like Sherman’s double-bill format. I want to keep that.”

Next time you pop into the New Beverly Cinema to catch a Kubrick classic or a Jesse Eisenberg double feature, say a little prayer in thanks to Quentin Tarantino.