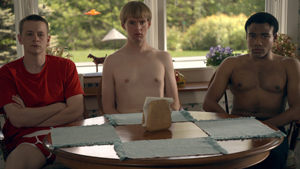 What would it be like if Encyclopedia Brown solved an actual murder, armed with nothing more than his curiosity and childhood naivety? Mystery Team is the comedy that delivers an answer to that very question.

Jason (Donald Glover) was the “Master of Disguise.” Charlie (Dominic Dierkes) was the “Strongest Kid in Town.” Duncan (D.C. Pierson) was the “Boy Genius.” Together, the three friends solved innocuous neighborhood mysteries, things like missing pies and stolen toys.

Only, as all the other kids around them grew up and blossomed into young adults, the Mystery Team got caught in a severe case of arrested development. Now, as high school seniors, they are still solving the same petty crimes, much to the annoyance of fellow students and adults, and no one will take them seriously … except the little girl that wants them to find out who murdered her parents.

Mystery Team is the first feature film by the Derrick Comedy troupe, known mostly for their online sketch comedy shorts, and the film is largely a success. The movie starts off silly and slightly ridiculous, rushing through character introductions much too fast but becomes truly engaging, and often hilarious, once the boys start investigating a double homicide.

The comedic bits range from witty banter to some pretty extreme scatological fare, but nothing worse than anything you’d see in, say, a Farrelly brother’s film. It probably helps that the protagonists themselves are often too innocent to know that the situations they are in are decidedly adult affairs.

The cast is pretty strong, and the three leads certainly give the best performances in the film. The only flat performance is from Aubrey Plaza, who turns in a rather ineffectual portrayal of a young woman who has recently lost both of her parents. Unfamiliar with her work on the television show “Parks and Recreation,” I can only hope she adds a little more flavor to this year’s highly anticipated Scott Pilgrim vs. the World, wherein Plaza plays the character Julie Powers.

Likewise, the visual aesthetic of the film feels flat, due most likely to budget restraints, though the first-time director, Dan Eckman, manages to get a lot of mileage by just setting up the camera in front of the skilled comedic trio.

Not a classic, but a promising – and humorous – first feature.