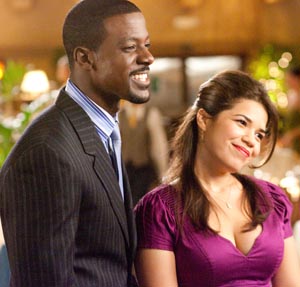 The institution of marriage has proven ample fodder for some of Hollywood’s most beloved comedies. In Father of the Bride, Steve Martin wrestles with the idea of going the nontraditional route and having the groom’s family pay for the celebration, while Nia Vardalos violates her Orthodox faith by falling in love with a WASP in My Big Fat Greek Wedding.

Our Family Wedding, starring Forest Whitaker and Carlos Mencia as two opposing fathers who must learn to get along before their children’s upcoming nuptials, is not a story we haven’t seen before. Guess Who’s Coming to Dinner broke new ground in 1967 when it represented the controversial subject of interracial marriage in a positive light, and earned 10 Academy Award nominations (and won two) in the process. It’s unlikely that Our Family Wedding will be winning any Oscars, but the end result makes for a lighthearted comedy that chooses to make us laugh instead.

The film opens in New York City. Lucia (America Ferrera as a Columbia law student) and Marcus (Lance Gross as her significant other) are in love and plan to travel to Los Angeles to tell their parents they’re getting married. There’s only one problem: She never told her parents Marcus is black, not to mention the two dads already have a checkered past.

Of course, from there the families embark on a series of mishaps and blunders as they try to accept one another and their cultural differences. There is one scene in particular where Lucia’s grandmother falls flat on her face after being introduced to Marcus. As the matriarch of the Ramirez family, Grandma (played wonderfully by Lupe Ontiveros) is against the marriage from the get-go, but eventually buckles down and accepts Marcus.

Whitaker is at a point in his career where he can play nearly any role to perfection, and he’s effective and charming as Marcus’ playboy father.

Then there’s funnyman Mencia, known for playing a variety of over-the-top characters on his Comedy Central program, “Mind of Mencia.” Although this is his first plunge as the imperfect but devoted father, he’s still too narrow for a comedic role that requires a softer side. There were parts where Mencia looked strained while attempting to extract emotion that even he knew he was incapable of producing. Perhaps he should stick to television.