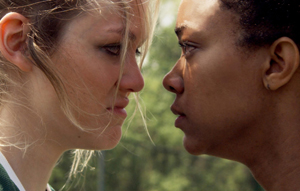 Following two teenagers on divergent paths, Toe to Toe depicts the struggles of girls at a school in Washington, DC.

Tosha (Sonequa Martin) is an African American from one of DC’s most impoverished areas, while Jesse (Louisa Krause) is a wealthy but troubled white kid plagued by self-destructive behavior.

Both star players on their school’s lacrosse team, they click despite their differences, and a fledgling friendship sprouts, which begins to falter when they discover their shared interest in a local deejay.

A contemporary indie flick focusing on female friendships, audiences might recognize its characters all too well, for Toe to Toe, although finely acted, is merely another modestly scaled look at the current realities of female adolescence.