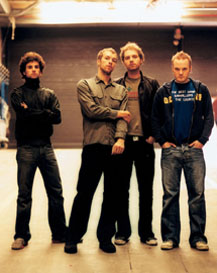 It is the afternoon of another one of Coldplay’s feverishly anticipated concerts, and singer Chris Martin is for the first time hearing a blow-by-blow description of the ticket sale that preceded it.

Hundreds of fans waited in line at the club’s box office for hours the previous weekend, only to be shut out of tickets when the show sold out in mere seconds. Within hours, the $23 tickets were being auctioned by scalpers for $700 or more on eBay.

Martin tilts back on a footstool in his hotel suite and sighs.

“We screwed up royally, and we should be assassinated for it.”

It’s intended at least partly as a joke, but Martin’s grim expression says otherwise. In a few hours, he will lead Coldplay into a club packed with adoring fans including his wife, actress Gwyneth Paltrow.

The idea is to prime audiences for Coldplay’s forthcoming album, X&Y (Capitol), due out June 6, the follow-up to two of the most successful rock albums of the decade, Parachutes (2000) and A Rush of Blood to the Head (2002), which have sold nearly 6 million copies in America, according to Soundscan, and 20 million worldwide.

The British quartet is poised for an even bigger year. “In terms of the tension and anticipation (surrounding its concerts and forthcoming album), I feel this could be the biggest band in the world,” says Andy Cirzan, vice president with Jam Productions.

But at the moment, Martin isn’t feeling much like celebrating. He’s a rock star finding himself confronted with the realities of rock stardom, of being in a band with three college friends that has turned into a big-time, money-churning machine from which millions of people, from record company executives and radio programmers to journalists and everyday fans, want a piece.

Martin tries to continue with the interview, but he’s obviously distracted. “I can’t go on with this until I do something,” he says, and jumps up to summon his tour manager, Dave Holmes.

“Let’s do a free show!” Martin suggests. “A free show at sound check. We’ll do seven songs for anybody who wants to drop in. Announce it on the radio this afternoon and just invite everybody.”

Martin’s a worrier, the kind of a rock star who says he tries not to take his wealth and fame for granted. For several years, he’s traveled to Third World countries and campaigned for fair-trade policies to ease pressure on impoverished economies. He draws attention to the cause by brightly taping his fingers and inking an “equal” sign on his left hand, which he says encourages questions.

“I’d be a bastard if I were interviewed every day and didn’t at least mention a few things once or twice that didn’t have to do with my band,” he says.

At the same time, he acknowledges his band is on a mission to be the “biggest” in the world. “Maybe it’s because we were raised on reading U2 books,” he says, “but there is no shame in joining the mainstream, of wanting the biggest possible platform for your views. I’m not saying we’ll be as successful as U2, because I don’t mean ‘big’ in terms of size. I mean ‘big’ in terms of the weight of what we can do.”

Biggest band in the world? It’s a dubious aspiration, especially for a singer whose persona resembles an idealistic schoolteacher more than it does a ruthless climber. The affable, apple-cheeked 28-year-old son of an accountant and a teacher, he is the antithesis of the disheveled rock ’n’ roll bad boy.

“We were never very cool,” says Martin, who met his future bandmates Will Champion, Jon Buckland and Guy Berryman in 1996 when they were attending University College in London.

But if Coldplay never did quite develop a sneer, it did get better and bolder. The quartet’s songs were always exquisite, its best melodies rapturous.

“As a songwriter, Chris Martin is in the classic English tradition with people like Ray Davies and Pete Townshend,” says U2’s Bono. “Their tunes get under your skin, and there’s an ecstatic quality to the music that becomes more apparent each time you listen.”

What was lacking, until now, was the boldness that separates well-crafted songs from great rock. Coldplay once tended to come off as overly modest, almost awkward in concert.

“It took us a long time to accept that people are not paying to see us be weak and apologetic about our songs. We have to stand up and fire at them. We were playing all these radio festivals in America during our first tour (in 2001), and we were sandwiched between bands like System of a Down, Staind and Disturbed, and we were getting abused.

“The audience was throwing things at us. Then we played our own show in Atlanta soon after, and it was an amazing feeling. It freed us up. We thought if we’re going to do something, we should show our passion because people will respond to it.”

X&Y is the culmination of that learning curve. It’s not only bigger and more aggressive than anything the band has ever attempted, it’s also stranger and darker. Influences from ’70s art-rock began filtering into Coldplay’s performances, with Champion in particular adapting a style of trance-groove drumming from the work of German bands Neu and Kraftwerk, as well as Joy Division, New Order and David Bowie’s Berlin-era albums with Brian Eno. Not for nothing is one of the best new songs named “Low,” also the title of a classic 1977 Bowie-Eno collaboration.

It was such serendipity that led to the creation of the band’s breakthrough song, “Yellow” (with its indelible chorus of “Look at the stars/Look how they shine for you/And everything you do/Yeah, they were all yellow”), while Coldplay was recording its first album on the coast of Wales.

“We would sit out and look at the sky a lot because it was always incredibly clear, quite a contrast from living in London,” Martin recalls. “Ken (Nelson) our producer said, ‘Look at the stars, lads.’ And then we went back inside to record another song, ‘Shiver.’ But while I was waiting for the tape machine to turn on, this song spilled out. I was thinking about Neil Young, strumming the guitar and the words were there, except the most important one.

“The word ‘yellow’ has all this meaning attached to it now, but here’s where the mystery ends. It’s not quite so romantic. The whole song makes lyrical sense except for that word. I needed a two-syllable word, there was a book next to me with the word ‘yellow’ on it, and there it was ... now the mystery is solved, or shattered. But it worked.”

A similar spirit guided the most productive sessions for X&Y. Martin was in Chicago with Paltrow while she was filming the forthcoming movie Proof in October 2003. He was enchanted with the fresh air blowing off Lake Michigan and the city’s skyline, so he summoned Buckland from London to join him at Chicago Recording Company studios on Ohio Street.

The band pushed its boundaries on expansive rock tracks such as “Square One” and “Low,” and even ballads such as “What If” and “Fix You” acquired a majestic glow. At the same time, there’s modesty at the core of the music. Martin ponders big questions in the lyrics – Why are we here? Where are we going? – but he doesn’t pretend to have the answers. He sounds lost in these songs, his falsetto conveying uneasiness as much as yearning.

“It may sound universal, but these songs are actually very personal,” says Martin, with a wan smile. “Whenever I try to contrive something, it ends up sounding like (expletive). The best ideas just arrive because we’re already living them.”

Visit the Chicago Tribune on the Internet at http://www.chicagotribune.com/

X&Y will be available June 6.