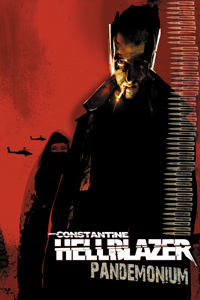 Original Hellblazer writer (not counting creator Alan Moore) Jamie Delano returns to pen a special graphic novel in honor of the character’s 25th anniversary. With him is artist Jock, who seems to be just about everywhere these days.

Delano manages to come up with an original take on a character and genre that have been around the block a few times, transporting the Liverpudlian occultist to war-torn Afghanistan. The British government shanghais Constantine, forcing him to investigate a Djinn that has been feeding off the carnage of the war and who is being held in a military prison. Constantine’s journey will take him to Hell and back, taking on Babylonian gods in the process.

Delano’s writing is well researched and convincing. And he uses the genre to comment on the real world, which is ultimately the purpose of horror fiction.