EMC Monkeys: Give it all. Train Hard. Live Free. 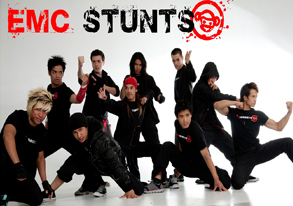 EMC Monkeys were influenced by the Ninja Turtles.

I walk into a Long Beach Ballet Studio where I’m supposed to meet and interview a team of martial artists, and instead, I hear a piano, opera singing and thumping – the inevitable leotard prancing is sure to be behind door No. 1. To my bewilderment, I had shown up at the right place. I was steered into the room and saw three ballerinas – no surprise – and four guys in gym shorts, tank tops and sneakers, moving to the rhythm of the music.

A brief break in the music and one of the guys, Danny, acknowledges me, “This is totally new to us.”

Known professionally as Evolved Martial Concept (and affectionately called Evolved Monkey Combat by fans), EMC Stunts started about six years ago as two separate teams who met on a training ground to “monkey around.” They became one team of 10 in the end, with a mission to “save the universe, get the princess and defeat Bowser.”

Thus starts my interview: “OK, put the cat down,” and a guy who was petting an invisible cat on his lap gently sets it on the ground and lets it walk away, only to be scared and stomped on by another member. (Author’s note: This was one of the weirdest, funniest interviews I’ve ever done.)

Immediately I notice the chemistry between the team. They are like those twins who could finish each other’s sentences, except there are six of them, talking all at once.

“Each individual – ‘is an individual’ [clips in someone else] – is highly decorated in their art,” says Xin, a senior member of the group, otherwise known by YouTube fans as the Urban Ninja.

The four main arts of EMC are: Chinese Gung-Fu, Kickboxing, Tae Kwon Do and acrobatics. Aside from many years of technical training, each member has varying levels of performing experience, ranging from movies, commercials, live shows, expositions and touring with celebrities like Tina Tuner.

Malay, another senior member, says, “We can do whatever – that’s just my philosophy.”

However, Xin really wants to get back to their roots of performing at live shows and reconnecting to their fans.

Their Web site reads: “Why do we do what we do? Why do birds fly? Why do fish swim? Why do monkeys throw poo? Because that’s what we were born to do!”

Danny, the youngest member on the team, says, “There are a lot of ‘tricking’ teams out there, and a lot of stunt teams, but one thing is for sure: We are the coolest team you’ll ever meet!”

While the monkeys like to have a good time, they keep themselves grounded. Especially being based in Los Angeles, they are surrounded by teams who put fame too high on their priority list.

Malay says, “What sets us apart [is] we don’t do flashy stuff. We’re real. People are losing the ‘martial’ and putting too much emphasis on the ‘art.’’’

Xin agrees: “We’re not Hollywood. We don’t suck up and kiss ass just to get a job.”

“We know what we’ve got, and we don’t feel the need to show off to other people,” Malay continues.

“When we were being taught, things were hard. Now, there’s no excuse to not train. If your ankle hurts, do sit-ups. If your arms hurt, work on your legs,” says Danny.

This work ethic comes from their more than humble backgrounds.

As Xin explains, “Seriously, we were so poor, the only way to learn martial arts was to watch Bruce Lee and the Ninja Turtles.”

Danny explains that many of the members grew up in broken homes, but were able to rise above and make the most of it.

But as Malay emphasizes, “Anybody can turn their life around, no matter where you’ve been.”

“When I see our team and how we’ve risen from that, I’m proud,” states Xin. “It makes me feel like we’re invincible. For more than half of us, our let-out was martial arts to keep away from drugs and violence, and it brought us to where we are today – not dead … doing opera.”

EMC will perform March 12 in the X Collabo Show at the Poodle Parlor and March 20 and 28 in “Nixon in China” at the Long Beach Opera. For more information, visit emcstunts.com.