Black Rebel Motorcycle Club: There was never a plan b. 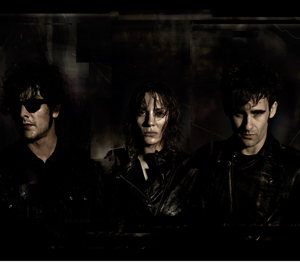 When a Black Rebel Motorcycle Club song comes on, the world becomes black and white for a few minutes. Polyester sweaters feel like black leather jackets and the wall of sound Robert Levon Been, Peter Hayes and Leah Shapiro bring to their newest opus, Beat the Devil’s Tattoo, can take you to a folky, psychedelic paradise.

The album title borrows from Edgar Allan Poe’s 1839 short story, "The Devil in the Belfry." Whenever you fidget your fingers to an annoying beat or tap your feet relentlessly on the ground, you’re beating the devil’s tattoo. Ironically, that sort of impatience doesn’t show on the album. Whether their songs are two minutes or 10, they end appropriately and take you somewhere new.

“When you finally say it right, you usually know because you used the least amount of words to say the most. It’s like having a conversation, and maybe it’s in your own head, but some things get simple and that’s usually when lyrics start to form,” Been explains. “You’re in the groove with words so you wait for that feeling and until it comes, you just keep going.”

“We were trying to be back to the roots of when we began. The feeling we had when we started and when we got together; when it was just really simple and fun and it wasn’t all complicated and muddled up,” Been explains.

Tattoo seemed like it would never happen in the summer of 2008 when they fired drummer Nick Jago. The band struggled to find itself musically and emotionally.

“Nick’s been on the fence for years so it wasn’t maybe as much a shock to us as it was to other people. Once he finally went his way and we went ours, we felt pretty lost,” Been admits. “We didn’t know where we were going to go, what we were going to do, if we were even going to keep the band going or keep it going with the same name.”

During a scheduled European tour that same year, they enlisted the help of Shapiro, who was the tour drummer for the Ravonettes at the time.

“When [Shapiro] came around, she just came in to fill in a couple shows. We had some dates that were booked a long time ago in Europe. Playing with her made us look at the whole thing differently. It felt like it fit. It felt right. I don’t think there was a plan b; if she didn’t fit, we probably would’ve called it a day,” Been admits.

The parallels to Howl reach beyond band cohesion. To achieve the sound they felt Tattoo needed, they flew out to Philadelphia to crash with some friends who converted a basement study into a recording studio. It’s the same studio they used to record 2005’s Howl. Not only did recording there make sense because the vibe was so relaxed, but it also helped that it was all for free.

“We were recording in the winter out in [Philadelphia]. We’re pretty thin-skinned California boys so we can’t really take the cold like that,” Been says with a laugh. “The vibe was to stay warm and stay sane and we only kind of halfway achieved both of those. It was a bit of a crazy winter. Cabin fever definitely came into play.”

“[Our friends] let us stay in their house and become part of their family. It was pretty wonderful to get to make a record like that rather than punching in your time card at the studio and it costs this and that and you’re always worrying about time and money,” Been explains.

Of the 23 songs recorded, Tattoo features only 13 of them. Been plans to release a couple of the 10 songs as b-sides while the rest will occupy a shelf until the time comes to record the follow-up to Tattoo. The possibility of a double album didn’t fancy Been.

“We’re not going to get rid of ’em. They mean something to us. There was a question of putting out a double record, but it just seemed like it was too long. We don’t want to play that long,” Been says.

All the tracks, except “The Toll,” were created during the blizzard that blanked the east coast over the winter. For the “The Toll,” which was recorded a year ago, Been and Hayes share vocal duties with Nashville singer/songwriter Courtney Jay. Not very many bands can get away with slipping in broody ballads followed by rockers, but Black Rebel Motorcycle Club does away with conventions and plays by their own rules. The only one they follow is balance.

“The only way you get any power from those kinds of songs is when you can slow down and appreciate that speed. So it’s neat to make a record where you can weave in and out of that,” Been points out. “It’s about as far from smash-my-fist-into-a-wall, which is what full-on rock ’n’ roll tends to be like. It’s the other end of that story. Maybe after the fire tends to be the ballad.”

One treads a fine line when composing a sad tune. The main themes in any Black Rebel Motorcycle Club song are struggle and redemption. Tackling those issues without coming across as tacky is a fear Been genuinely feels.

“I can’t stand most music, and it gives me good perspective. We’re really critical of other people and that makes us twice as critical of ourselves, so it’s the only good thing that comes from that complex perfectionism,” Been admits.

Perfection in the studio comes from experiences on the road. Some bands hate the road. There is driving, flying, interviews and other distractions that take away from the music. When you’re at a Black Rebel Motorcycle Club show, you’re in a completely new atmosphere where the musicians want to disappear into the music, but the fans won’t let them.

“Black always seems like the best color for disappearing. Until they make a better color,” Been muses. “We wanted to disappear in the music. Even the whole image thing was to let the music speak for itself. We found out the hard way that people don’t really see it that way. It’s an obsession in rock ’n’ roll with image. We tried to stand out of the way of the music, but in our attempts to do that, we kind of fell right into it.”

Songs like “Rifles,” off their 2001 self-titled debut, feel like a score to a movie that hasn’t been filmed. Their film noir vibe and the their camera obscura approach to their band imagery would hint that they’re conscious of how they’re perceived, but in reality, it’s a dice roll.

“A lot of our music feels cinematic. I get that feeling a lot, but I don’t know why. I’ve always been really into films so a lot of that creeps in here and there. It’s a happy accident,” Been says. “We didn’t want to be from any one place or any one time. There’s a lot of bands that look and feel like the time and they’re great, they’re exciting, but that moment goes as soon as the next fashion comes around and that music goes as soon as the new fashion season begins and it doesn’t feel right. I think music can mean a lot more than that.”

Band democracy is easier to manage with three personalities. As their jams progress into songs, and the melodies in their head are translated into a microphone, it’s difficult to discern whether Been or Hayes sing at any given time. Their voices blend so perfectly that it almost doesn’t matter who sings.

“Usually, it’s whoever can get to the microphone first and come up with a melody. We have this cool little competition when we start jamming on something and you start singing in your head [and] whoever gets to the mic first wins,” Been shares. “But it’s like you don’t step up to the mic until you’ve got something good, so it can be a while. It can be a Russian roulette. It’s all in good nature.”

What’s represented on record isn’t the whole vision Black Rebel Motorcycle Club wants you to see. In their constant pursuit of perfection, a song is never really over.

“I still work on ’em even from the first record,” says Been. “I’m still thinking about words and parts and places it can go. A lot of our songs change lives. A song is never really finished. It’s never really done until it’s done you in.”

Beat the Devil’s Tattoo is currently available. Black Rebel Motorcycle Club will perform March 11, 12 and 14 at Echoplex and March 16 at House of Blues Anaheim. For more information, visit blackrebelmotorcycleclub.com.

Interviews
Searching for hope? Kacey Musgraves’ ‘Rainbow’ is a psalm, and balm, for the pandemic era
597 views

Interviews
You might think, ‘Who asked Dashboard Confessional to come back?’ Chris Carrabba has some answers
634 views

Interviews
Billie Eilish isn’t stressing over the Grammys. She’s busy worrying about the end of the world
1,135 views

Interviews
With new fans aboard, Korn shows how to metal in middle age
1,049 views

Interviews
Jade Jackson may be the next big country-rock star. But first, she has some tables to wait
1,208 views