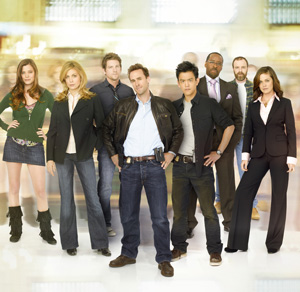 I’m a movie person. I love the cinema, the cushy seats, the strangers laughing or crying along with you. That is totally my jam. But I get it that many of you like your quality television.

Not MTV’s “Jersey Shore” phenomenon or any of the other reality shows that plague the airwaves. I am referring to quality TV like “Mad Men” or “Curb Your Enthusiasm” or any HBO, Showtime or AMC show. I’ll even give NBC and ABC their credit where it’s due because they have some shows that are pretty darn great.

This week, I am suggesting a few screenings that would greatly interest those of you who are movie'd out after the big Oscar weekend. As much as I love them, I understand your fatigue.

This week, the 27th Annual William S. Paley Television Festival, informally known as PaleyFest 2010, is back for several weeks of showcasing some of the best new shows as well as some season veterans. The Paley Center for Media is known for this festival that, every year, features screenings of one or more episodes of the series, followed by a panel with the cast and creators. Named for William S. Paley, founder of CBS, the annual festival has been celebrating the creative process behind the art of television for the past 26 years.

Wednesday, March 10, features the cast and creative team of “Breaking Bad,” AMC’s drama featuring Bryan Cranston as the antihero of the series who is diagnosed with terminal cancer and who falls into the drug underworld, producing and selling crystal meth.

ABC’s first-year, sci-fi drama “FlashForward” will be screened on Thursday, March 11. The series details Joseph Fiennes’ character and his team who are forced to figure out why billions of people are simultaneously envisioning their lives six months into the future following a period when everyone in the world blacked out for 137 seconds. Based on the novel by Robert J. Sawyer, the show was created by David S. Goyer and Brannon Braga.

“Men of a Certain Age” is coming to the Paley Center on Friday, March 12. Stars Ray Romano, Scott Bakula and Andre Braugher will screen and discuss their newest show about three best friends who grew up living the American Dream but who have now reached a shaky midlife. The show is a comical look into how growing old doesn’t necessarily mean growing apart. This session is guaranteed to be laughter-filled with Ray Romano at the steering wheel.

Finally, for all you Gleeks who have been waiting with bated breath since December for the return of Fox’s breakout hit “Glee,” the show will be featured on Saturday, March 13. Cast, including Rachel (Lea Michele), Quinn (Dianna Agron), Finn (Cory Montieth), Mr. Schuester (Matthew Morrison), Sue Sylvester (Jane Lynch) and the rest of the glee club. Incredibly successful in just its first season, “Glee” follows the William McKinley High School show choir as they seek to win competitions and the acceptance of their fellow classmates. Like a Broadway musical, the characters break out in song and dance, which surprisingly is not as cheesy as you would expect it to be.

PaleyFest does require an entrance fee, and tickets are still available. More than anything, as a huge Gleek, I am really looking forward to hearing what the cast and crew of the Golden Globe-winning series has to say.

Not only does the festival program allow viewers an inside look at hit shows, but you get to hear it straight from the horse’s mouth.