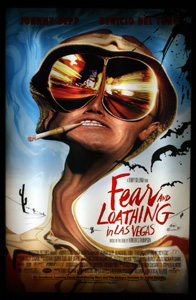 I’m one of those types of people whose views on life are what you would call “progressive.” Which is an indirect way of saying I think drugs are awesome, and I’m not talking about Tylenol or Advil.

Now, before you get your panties in a twist and go running to the phone to call your conservative Republican congressman and demand he blacklist me for writing hippie crap like this, you should know that I don’t think all drugs are good and I don’t think everyone should take them. Anything can be good in moderation, but some people don’t know what moderation is, which is why drugs get a bad rap most of the time.

But what people who don’t use drugs and people who do use drugs agree on: Films about drugs kick ass! Which is the exact reason I’ve put together a list of my all-time favorite drug films. There are a lot of great films that focus on drug dealing and/or drug trafficking, but this list is mainly comprised of films where the usage of drugs is either the main focal point or part of it.

Requiem for a Dream

Master filmmaker Darren Aronofsky’s adaptation of the book by Hubert Selby, Jr. is a chilling and ultimately sympathetic portrayal of the effects that drug use has on the lives of four people. This is one of my favorite films of all time and features incredible performances by Jared Leto, Ellen Burstyn, Jennifer Connelly and Marlon Wayans.

This film will make you feel like you’re actually on crystal meth. This meth-focused film directed by Jonas Akerlund follows an ensemble of characters ranging from drug dealers and drug users to corrupt policemen. While the film is packed with good actors who give great performances, it features a wonderful turn by the late Brittany Murphy.

This heart-wrenching tale starring Leonardo DiCaprio and Mark Wahlberg is about a group of young boys who become addicted to heroin at the age of 16. DiCaprio’s performance in this film is riveting, especially in a scene where he is locked in a room and experiences violent drug withdrawal. Lorraine Bracco also gives an incredibly tragic performance as DiCaprio’s mother who has to watch her son’s life fall apart from drug abuse.

This film stars Val Kilmer as a man who, after the murder of his wife, becomes addicted to speed. The film also features a crazy performance by Vincent D’Onofrio, who plays a drug dealer named Pooh Bear who has snorted so much speed over the course of his life that his nose cartilage has been completely worn away and all that remains is an empty cavity where his nose used to be.

Before Danny Boyle won an Oscar for directing Slumdog Millionaire, he directed this intense British dark comedy about a group of heroin addicts. Most of you only know Ewan McGregor as Obi-Wan Kenobi, but I’ll always know him as Mark Renton, the smack-addicted protagonist of this deliciously disturbing film.

Alcohol is a drug, my friend. If you like to drink but are anti-drug, you’re a massive hypocrite. Which is why this Mike Figgis-directed film starring Nicolas Cage as a man who decides to drink himself to death is on this list. The film is incredibly sad but equally brilliant, and features probably my favorite performance from Cage. If you’ve never seen someone drink booze like it’s water, this film will blow your mind.

Speaking of blowing things, the next film on my list is exactly that. Even though this film is primarily about selling cocaine, there’s enough usage in it to qualify it as a drug-use film. Johnny Depp stars in the true story of George Jung, a man who made millions from smuggling and selling cocaine in and out of Miami in the ’80s. One scene that stands out in the film is where Depp is in a hospital room standing in the back watching doctors deliver his child from Penélope Cruz. He’s been up for days doing coke and is shaking all over and can barely stand up.

The ultimate weed movie. Pot is a much less controversial drug than all the others, so the films about it tend to skew more on the humorous side. Cheech and Chong star in this hilarious flick about two stoners who do just that: get stoned. A lot. Why is it the ultimate weed movie? Because in one scene Cheech and Chong are driving around in a truck made entirely from weed.

Another lighthearted marijuana romp. Dave Chappelle stars as a janitor who starts up a pot dealing business with his friends to earn enough money to bail another friend out of jail who accidentally killed a police horse by feeding it junk food. Like I said, movies about weed tend to skew more humorous.

Fear and Loathing in Las Vegas

As far as I’m concerned this is the mother of all drug movies. Directed by master visionary filmmaker Terry Gilliam and starring Johnny Depp as Hunter S. Thompson, this film is an adaptation of Thompson’s most iconic book of his career. The story follows Thompson and Dr. Gonzo, played by Benicio Del Toro, on a wild drug-frenzied quest through Las Vegas. All that needs to be said about this film can be summed up in the opening bit of dialogue: “We were somewhere around Barstow, on the edge of the desert, when the drugs began to take hold.”