Joe Torre And Sandy Koufax: A Chat for Charity 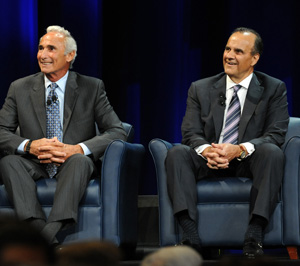 They came in droves, a sold-out crowd of more than 7,000 people packed the house at Nokia Live Feb. 27 to catch a glimpse of Dodger manager Joe Torre and iconic pitcher Sandy Koufax in conversation. It was a charity event for Torre’s Safe at Home Foundation, which helps individuals dealing with domestic violence, an issue close to Torre’s heart as he himself was raised in a family plagued by abuse. The fact that Sandy Koufax agreed to take part was of special interest; the legendary lefty has famously avoided cameras and interviews for years. His reclusion has in many ways added to his mystique, and the promoters of this event capitalized on this.

“Only Torre could bring Sandy back,” read one ad. The idea of the two Brooklyn natives talking baseball and reminiscing over old times while part of one bigger Dodger family proved irresistible to fans.

The event was marred, or colored if you prefer, by one unfortunate element, moderator T.J. Simers, the notoriously snarky sports columnist of the Los Angeles Times. Despite his best efforts, Simers had difficulty avoiding inappropriate comments, suggesting for example that Koufax was a “softy” and barbing Torre for failing to “try success” after leading the Dodgers just shy of a World Series appearance two years in a row. It was comments like these that made the conversation somewhat less than warm and intimate. One moment of humor occurred when Koufax was asked what his least favorite part of being in the Major Leagues was.

“Having to deal with reporters like you,” Koufax answered quickly to loud applause. It was not, however, Simers’ irreverent comments that made the evening feel less than satisfactory. It was his failure to steer the conversation toward meaningful subject matter. For example, what was it like for Koufax to be the most famous Jewish baseball player in the world? The subject was touched on but with little depth. Thank God for Torre, whose ease and sociability brought the conversation back to worthwhile topics. One of the more profound moments took place when he opened up about his troubled upbringing, giving a sense of reality to what might have been an entirely surreal event.