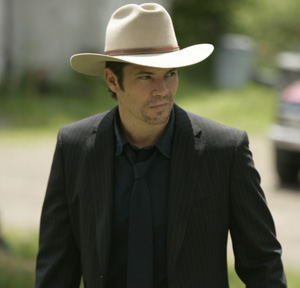 There was a time when a U.S. Marshal’s deputy was allowed to shoot someone on sight. Too bad Raylan Givens did not get the memo that Marshal’s deputies have not been able to freely pull triggers on suspecting bad guys for more than a century.

Perhaps the South Beach sunshine was too much for Givens (Timothy Olyphant) to handle. Perhaps the gunslinging deputy had every right to kill a thug on a Miami rooftop restaurant as he was eating lunch. Either way, Givens’ superiors are not at all happy about his newfound license to kill. His punishment? Being sent off to a modern-day Wild West – his hometown in the rolling hills of Eastern Kentucky, a place he vowed he would never return to when he quickly bolted at the age of 19.

Alas, here he is in “Justified,” an FX original series chronicling Givens’ unwilling departure from the good life in Miami to his entry into the mining hills of Harlan, Ky., where his haunted past follows him like a stalking girlfriend who defiantly ignores a restraining order placed against her.

Indeed, when he arrives at the airport in Lexington, Ky., it does not take long for Givens to stumble upon his old life, the very one he wanted to get away from when he was working the coal mines as a teenager.

Almost as soon as he steps into the office of his old friend and new supervisor, Chief Deputy Art Mullen, Givens in thrust into a gritty-paced investigation involving the terrorist acts of long-time pal and mining mate Boyd Crowder (guest star Walton Goggins).

So begins the pilot episode of “Justified,” which pits a defiant federal officer against an old friend. And of course, what fun is a battle between black and white hats without a buxom of a love interest. For Givens, he has to deal with two – the demure yet steady Ava Crowder (coincidentally Boyd’s sister-in-law and longtime romantic admirer of Givens) and Winona Hawkins (Givens’ ex-wife).

With drama and cross-stories built into the early stages of the pilot’s plot, “Justified” is a modern-day Western film taking audiences deep into the mind of the show’s protagonist.

Split into a series of episodes, the show is indeed an interesting tale of Givens’ life as a defiant federal officer who seems constantly in tune with his convictions yet still struggles to come to terms with some of the skeletons in his closet.

Olyphant plays the sure-and-steady Givens, portraying the federal officer as cool, calm and collected, yet also vulnerable and troubled. The veteran actor’s rendition of Givens would make Elmore Leonard proud, as the accomplished crime novelist created the gritty character in his short story “Fire in the Hole.”

Joining him on the cast are “CSI”’s Nick Searcy, Givens’ passively aggressive superior in Kentucky, Jacob Pitts (21) and Erica Tazel (“Life”), both of whom team up with Givens as fellow Marshal’s deputies in semi-rural Kentucky.

Also making a guest appearance in the show’s pilot is Joelle Carter (American Pie 2), playing the girl-next-door who lived down the street from where Givens grew up and confesses her longtime crush on him.

With each episode presenting a fresh story line with even “fresher” villains, “Justified” in many ways pays homage to the cavalier law enforcement dramas of the 1980s, like “Knight Rider” or “The A-Team.”

While it is not as revolutionary or breakthrough as other programs like “Nip/Tuck” and “It’s Always Sunny in Philadelphia,” ultimately the same fans who enjoy the FX productions of “Rescue Me” and “Sons of Anarchy” will also find something to hang on to in “Justified.”