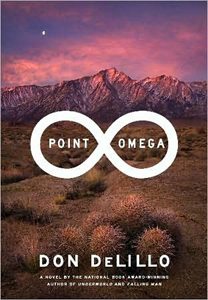 No writer better captures contemporary American consciousness than Don DeLillo. His latest is a slim book, which is not to say that it doesn’t tackle some big ideas.

The book follows Jim Finley, a filmmaker who goes to the desert to convince Richard Elster, a former government official to star in a documentary. Elster served as an intellectual consultant brought on to advise the administration on how to sell the Iraq war to the public. Now he has fled civilization. Finley finds himself unable to convince Elster but unable to leave the desert, as Elster discusses the Omega Point – the moment in time in which human consciousness will reverse its evolution.

Bookmarking the novel are episodes involving an art installation of the film Psycho slowed down to run for 24 hours. Amazingly, it was an actual art piece, since it’s such a DeLillo-esque idea, to take a mass culture phenomenon and show it in a new light, imbuing every small detail with larger meaning.