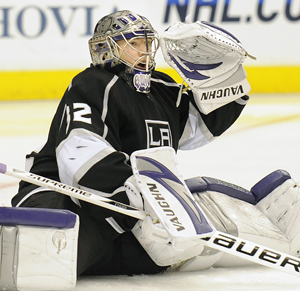 Talk about a momentum kill – first, the Los Angeles Kings lost two of three games after winning nine straight, only to be interrupted by the Vancouver Games and a two-week NHL hiatus. When the Kings (38-22-4, 80 points) returned to work last week, things appeared to start on the right foot when netminder Jonathan Quick earned his franchise record 36th victory against Dallas March 2. Too bad the rest of the Kings’ body (of work) was about as lethargic as team announcer Bob Miller’s, as Los Angeles dropped four of six games overall since its nine-game surge.

As the Kings look ahead to their final 17 games, they can only hope their recovery does not take longer than Miller’s, who has avoided the television booth the last three games since the NHL returned to action due to a case of the shingles. Just like winning – and losing – shingles is contagious, and the Kings are certainly trying to avoid the sister disease to the chickenpox like the plague.

While a Pacific Division crown is all but out of the question, the Kings now find themselves in a dogfight of a playoff race – and every win matters now, especially with three games remaining against the Colorado Avalanche, the team Los Angeles is currently tied with for fifth place in the Western Conference.

A favorable run in the final 17 games will not only allow the Kings to separate themselves from Colorado, but also pass division rivals, the Phoenix Coyotes, and claim second in the Pacific, third in conference and fourth seed overall. Such a finish would be among the best ever in franchise history, and Miller, more than anyone, desires his team to embark on a spectacular end-of-season run. The 37-year team announcer veteran just hopes the Kings recover faster from their slump than he is from the shingles.

All stats as of March 8.