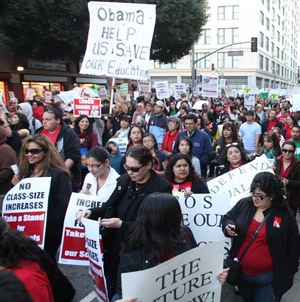 A day of passionate protest against education funding cuts attracted thousands of demonstrators March 4 to generally peaceful rallies, walkouts and teach-ins at universities and high schools throughout California and the nation. From Los Angeles to New York, students, faculty and parents at many schools decried higher student fees, reduced class offerings and teacher layoffs in what organizers described as a “Day of Action for Public Education.”

“We are paying more to get less of an education. That’s why I’m out here today to protest against that,” says California State University, Long Beach art education student Jessica Naujoks, who joined an estimated 2,500 others at a campus rally there.

There were reports of some trouble in Northern California. Demonstrators blocked access to the University of California, Santa Cruz and smashed the windshield of a car, triggering denunciations of such violence. At UC Berkeley, fire alarms were pulled in some classroom buildings, interrupting lectures. But statewide, no arrests were reported by early evening.

In the sprawling Los Angeles Unified School District, walkouts were reported at six schools, involving about 540 students in all, many of whom then returned to class, officials say.

In Southern California, the largest event was expected to be in downtown Los Angeles’ Pershing Square, where busloads of demonstrators arrived from schools across the region. They were to march a few blocks away to the Reagan State Building.

Earlier in the day, campus police estimated that about 500 people gathered at UCLA’s Bruin Plaza. Chanting “Who’s got the power? We’ve got the power!” students and professors walked out of classes for the lunchtime protest. Later, a crowd held a sit-in at Murphy Hall, the school’s administrative headquarters, but police guarded the office of UCLA Chancellor Gene Block to prevent a possible takeover.

UCLA Professor Sara Melzer joined her students in a walkout from their French culture and writing course because she says she wants to stop what she described as the privatization of public higher education.

“It’s not just about student fee hikes,” she says. “That’s the tip of the iceberg.”

Roselyn Valdez, 28, an anthropology graduate student at California State University, Northridge, participated in the UCLA demonstration and held a white sign that showed a skeleton writing “RIP UC.” She says it stood for the demise of the public education system that helped her study at Los Angeles City College, UC Santa Barbara and now at Northridge. Valdez says she used loans, scholarships and worked various jobs to pay her education costs.

“With fee hikes I can’t imagine anyone else having the chance that I did,” she says.