The Runaways: Dakota Fanning and Kristen Stewart rock the wild side. 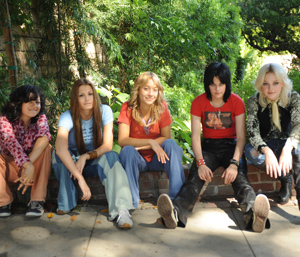 In every young actress’s career, there is the moment where she graduates from cute little child performer to hot onscreen ingénue. For Christina Ricci, her moment came when she filmed Buffalo ’66 opposite Vincent Gallo. For Natalie Portman, it was her turn as an unlucky-in-love stripper named Jane in Mike Nichols’ Closer. Why, even Drew Barrymore benefited from a little career overhaul when she stepped into the limelight after her sexy performance in Poison Ivy.

Now, Hollywood’s favorite little cutie stands up and demands to be noticed in the same way. So ... Dakota Fanning, welcome to the dark side.

The Runaways brings to theaters the story of the first influential all-girl rock band of the same name. The group consisted of heavy hitters such as Joan Jett (Twilight’s Kristen Stewart), Fanning as sexy lead singer Cherie Currie and Lita Ford (portrayed by Scout Taylor-Compton).

Jett and Ford both soared to new heights during the 1980s – Ford in a solo career, which even partnered her with icon, Ozzy Osbourne in the duet “Close My Eyes Forever,” and Jett as the voice of female rebellion on such tracks as “I Love Rock N’ Roll” and “Bad Reputation.” But it was Currie’s story, from which the film is based, that ultimately stands the test of time. The Runaways is based on her steamy tell-all Neon Angel: The Cherie Currie Story.

In 1975, Joan Jett was just another Valley Girl trying to break through the male-dominated world of rock. She spent her nights hanging out in Hollywood at places like Rodney Bingenheimer’s popular nightclub.

This is most certainly something his irreverent mind can comprehend, so he implores her to strike out and do just that. He even places his stamp on the process by partnering her up with a teenage drummer named Sandy (Stella Maeve).

The girls jam together a couple of times, and Fowley quickly sees that he’s got something good on his hands. As the band begins to take shape, the only thing missing is a lead singer. Currie auditioned for the band after being discovered at an all-ages club. With her smoky vocals and glam-rock image, she was just what the doctor ordered.

Fowley immediately put the girls into his version of rock ’n’ roll boot camp. He taught them how to fight heckling crowds and how to look like sex from the moment they took the stage. He also crafted – along with Jett – a signature song called “Cherry Bomb” for Currie, which would become the group’s crowning glory.

With fame came acceptance: Currie, who was the daughter of a well-known actress and an alcoholic father, soon found respite from her tumultuous home life. Instead of succumbing to a fast-food waitress future beside her sister, Marie (played by Elvis Presley’s granddaughter Riley Keough), Currie channeled her love of Ziggy Stardust and singing into a “Bowie meets Bardot” image. She cut her hair into a 1970s feathered platinum halo and began showing up about town in skintight jeans, low-cut blouses and glitter makeup.

Jett had also longed to be taken seriously as a musician. Although she had made a name for herself in certain circles as a proficient guitarist, the Runaways finally showcased her fire and energy.

Even Fowley saw his star rise as his find took over the Billboard charts in the United States and also in Japan. Asian audiences fell in love with the good-girl-gone-bad teen queens and their raucous songs. While on tour in Japan, schoolgirls and boys would nearly mob the Runaways, begging for autographs, attention and even the girls’ hair.

Soon, the media came calling. Magazine interviews and cover stories began to chronicle the wildness and jailbait backstage ups and downs of these California girls. Creem magazine featured them, and Currie even divulges that she was offered a shot at the cover of Rolling Stone (although she turned it down). They partied like women twice their age, having sex and taking drugs with just as much fervor as the men with whom they toured.

But like all good things, this ride would soon come to an end. Just two years after the Runaways formed, they fell apart due to jealousies, fighting and drug abuse.

Like any true Svengali, Fowley was not only brilliant at creation, but he also had a Ph.D. in destruction. He booked Currie on a graphic photo shoot, promising her that the other girls in the group would be shot separately for the unnamed publication. However, when the issue came out, it was a scantily-clad Currie who stood alone on the pages. Arguments ensued (including Currie’s well-documented rivalry with Ford) and before anyone knew what hit them, Currie left the band.

She went on to appear in a couple of movies, including the 1980 teen drama, Foxes, co-starring Academy Award winner, Jodie Foster. However, her drug abuse would make any real future in music a tough hill to climb. After a solo project, Currie eventually became a drug counselor for troubled teens. She has even made a name for herself locally as a chainsaw artist.

Currie was elated to see her story hit the big screen. She was especially impressed by Fanning’s portrayal of her teen years.

“[Dakota] nailed it,” she says, grinning. “She’s my favorite actress of all time. She’s as brilliant as you’d think she is.”

As for Fanning and Stewart, they were thrilled to get the chance to partner on this lively and dangerous project. Fanning is especially proud of her work on The Runaways.

“I think it’s a huge departure from some of the things I’ve done before,” she says. “I hope to do more roles like this in the future.”

Filmmaker Floria Sigismondi was also pleased with the film. She soared to fame in the 1990s as a successful music video director for Marilyn Manson. She is also the wife of a musician, so her knowledge of the scene proved highly beneficial to the production. At the end of the day, Sigismondi feels that the Runaways’ story was more organic and heartfelt than anything else.

Jett (who was also a producer on The Runaways) made tabloid tails wag when images of her alongside Stewart hit the airwaves. Jett insists that although she was a strong presence on the film, it was Stewart’s dedication that really made her stand in awe.

“Once I heard Kristen was cast, I wasn’t colored by the fact she was in Twilight,” says Jett.

As a matter of fact, Jett knew her legacy would be safe when Stewart even went so far as to cut and dye her hair black to add authenticity to her role.

Stewart admits that her time with Jett is something of value that she enjoyed from start to finish. Their initial meeting took place backstage at one of Jett’s shows on New Year’s Eve. Jett took her into the fold from the word “jump.”

“To prepare for a role like this, you can research, read interviews, watch old footage, but to my benefit, there wasn’t a whole lot of that available,” admits Stewart. “I was able to talk directly with Joan and think I would have felt like a fraud had I not.”

Where the music is concerned, that is Fanning’s voice you hear in the film. She belts out the signature tunes of this era with pathos and bravado. Co-star Michael Shannon (Revolutionary Road), who plays Fowley, can vouch for their musical prowess.

“They could play every one of those songs,” he says.

Just YouTube the early Runaways videos and you see a frightening parallel of Currie and Fanning, both in lingerie. Currie worked with her counterpart to get her acclimated to her unique moves and microphone tricks.

“I’m thinking about ‘Cherry Bomb,’ which was sort of Cherie’s defining moment,” says Fanning with a smile.

The Runaways have left an indelible mark on the music industry. As No Wave took over on the East Coast, the SoCal punk scene raged on in the West. As years passed, hair bands would have their asses handed to them by the flannel-clad groups of the Pacific Northwest. This movement was grunge.

But like Adam & Eve in the Garden of Eden, Riot Grrrl was born from its male counterpart. Many female-driven acts such as Bratmobile, Bikini Kill, Hole, Sleater-Kinney and the Fakes took to the scene (followed later by the Donnas), armed with guitars, a couple of chords, audacious political and feminist mantras and unflinching stage performances. Ask any woman from this era who her influences are, and the Runaways will surely make the list.

This is the ultimate legacy in music as well as life itself. Five teenage girls had the balls to galvanize and do what others told them they couldn’t. Their reward? The Runaways are now one of the most significant acts in the history of music.

The Runaways releases in theaters March 19.