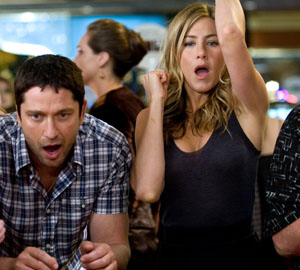 Here we go with another movie season, ladies and gents. Prepare to roar at Martin Lawrence and Chris Rock in Death At A Funeral, while Steve Carell and Tina Fey partner up for a Date Night. For every romantic, laugh-out-loud comedy, there is at least one epic tale of larger-than-life superheroes like Russell Crowe’s Robin Hood and Robert Downey Jr.’s Iron Man 2. With a splattering of Freddy’s killings in the A Nightmare on Elm Street remake and a much-anticipated MacGruber debut, it looks like there’s plenty to see in the theaters this spring.

Gerard Butler is a bounty hunter whose next target is Jennifer Aniston, his ex-wife. The war of the exes turns into a race for survival as both are thrown into a game of running from scary men and having to live with each other … again. It’s your Aniston/insert cute guy movie that is kicking off the spring season and may be good for a few laughs.

It’s the live action feature adaptation of the popular children’s series by Jeff Kinney that is sure to be a hit with tweens and pre-tweens exclusively. Diary of a Wimpy Kid details the life of a middle school student, Greg Heffley, as he struggles through a year with bullies, love interests and everything else a 12-year-old boy encounters in school, all of which he chronicles in witty diary entries and hand-drawn pictures.

In a futuristic world, Jude Law is a hired hand who becomes the hunted when he is unable to pay for an artificial heart. Forest Whitaker stars as his partner turned tracker in a race through friends and enemies. It’s like Gattaca meets Minority Report meets Blue Streak that all you sci-fi, action-thriller-comedy junkies are bound to enjoy.

The Runaways were a real-life 1970’s all-girl teenage rock band formed by Joan Jett and Cherie Currie who rose from their Southern California upbringing to become the legendary group. This biopic of sorts stars Twilight’s Kristen Stewart and Dakota Fanning as the duo who created the band’s tough cookie image. Expect: lots of throwing things, girl power propaganda, a brooding Stewart and a blast from the past soundtrack.

It may be refreshing to see Ben Stiller in an indie dramedy, something he hasn’t really done since The Royal Tenenbaums back in 2001. Noah Baumbach is the unapologetically artsy indie director who recently co-wrote the screenplay for Fantastic Mr. Fox and whose new film Greenberg is about a 40-something man’s search for what he needs to do with his life. Based on a story that Baumbach collaborated on with his wife, Jennifer Jason Leigh, the film has potential to be a smart, eclectic comedy this season.

John Cusack. Clark Duke. Chevy Chase. Craig Robinson. All different styles of comedy are represented in this spring hopeful that is advertised as Old Dogs for a slightly younger generation. It follows a group of best friends who come across a hot tub time machine that transports them back to 1986. Sure, the plot isn’t foolproof, but how can you go wrong with a heartthrob like Cusack?

How to Train Your Dragon (DreamWorks)

If you can’t wait until the new Shrek movie this May, the same people are bringing audiences an animated feature set in the mythical world of Vikings and wild dragons. Jay Baruchel is the teenager Hiccup who finds and trains a dragon, turning Viking lore on its head. The film also features the voices of Gerard Butler, Jonah Hill, America Ferrera and Kristen Wiig. My money is on the success of this DreamWorks creation, a studio that usually releases enjoyable animated films.

Nicholas Sparks is the novelist who has been taken to the big screen for what seems to be every chick flick love story lately. His newest is The Last Song starring Disney darling Miley Cyrus. She is a native New Yorker sent to spend a summer with her estranged father, Greg Kinnear. Of course, the music connects Cyrus with her family and lures in a hot love interest. Girls, you may be going alone to this one.

Clash of the Titans (Warner Bros.)

Louis Leterrier was responsible for making the more successful version of The Incredible Hulk, and now he’s taking on a project of godlike proportions. Clash of the Titans depicts the ultimate struggle for power: men against kings against gods. Sam Worthington, who flew with the success of Avatar, is battling Hades (Ralph Fiennes) who wants to seize power from Zeus (Liam Neeson). The battle scenes should be epic, and (hopefully) the filmmakers get their mythology accurate.

Carey Mulligan is another It Girl who is taking America by storm. After her nomination for An Education, she’s taking any role she can. Before her big role in the sequel to Wall Street, she’s starring in The Greatest, about a grief-stricken couple (Pierce Brosnan and Susan Sarandon) whose son is killed in a car crash. When a young woman (Mulligan) announces she is pregnant with their dead son’s child, the family must piece itself together.

One funny person plus one funny person has to equal one funny movie. “The Office” star Steve Carell and “30 Rock’”s Tina Fey star as a married couple whose date night turns into the date from hell. Mark Wahlberg and James Franco are two of the many obstacles facing the couple from a quiet night out. Fingers crossed Carell and Fey are as funny as their television counterparts.

Death At A Funeral (Screen Gems)

With a title containing the words “death” and “funeral” you wouldn’t expect the film to generate too many laughs. However, that’s the funny part, right? A remake of a British film of the same name, this version stars Danny Glover, Martin Lawrence, Chris Rock and James Marsden as a family grieving the death of a beloved member. Shocking secrets are revealed, festering resentments boil to the surface and all heaven and hell break loose in the funeral parlor.

Nearly three-quarters of the Earth’s surface is covered by water. You’ve heard that fact 1,000 times, but it doesn’t mean too much unless you really think about its significance. On Earth Day 2010, Disneynature is asking audiences to travel to the mysterious depths of our Oceans. The film features spectacular never-before-seen imagery captured by the latest underwater technology. You don’t have to be an animal lover to enjoy this breathtaking look at what lies beneath.

In late spring, the cute romantic comedies are in full bloom, and The Back-up Plan is the cream of the crop. Jennifer Lopez makes her return to movies after a few years out of the limelight as a woman who has yet to meet “the one” and decides to become pregnant via artificial insemination. Her prince is dreamy newcomer, Alex O’Loughlin, who is just a little too late. Comedy and love ensue as the storyline goes in an entertaining albeit predictable direction.

In an industry that loves to remake, remake, remake things that shouldn’t necessarily be remade, there are those stories that could use some modern technology. The reimagining of the 1984 classic is sure to revamp the old film with a new vision for the well-known villain Freddy Krueger, who for the first time will be played by someone other than Robert Englund. Just like in the first one, it’d be foolish to fall asleep in an equally terrifying remake.

Jim Carrey and Ewan McGregor are in love with each other. I could barely take myself seriously with that statement. But in their newest flick, they are gay men who fall madly in love with each other while they are both serving time in prison. Go-to girl, Leslie Mann, is Carrey’s wife who always enhances a film’s comedic scenes, and Carrey has transformed into an unrecognizable character for the quirky love story.

The trailer alone will make you smile from ear to ear. If you don’t like to see the silly things babies do, then don’t bother with this one. But for everyone else with a heart, this film is sure to be an entertaining break from the monotony of the theater. A documentary capturing the lives of four babies from all ends of the globe (Namibia, Japan, Mongolia and the United States), Babies shows that growing up is hard to do, wherever you may be.

Need I say more? After the phenomenal success of the first one, Iron Man 2 is unquestionably the most anticipated sequel the country has seen in a long while. Robert Downey Jr., who was born to play industrialist Tony Stark a.k.a. Iron Man, is pitted against Hollywood badass Mickey Rourke. Likewise, Pepper Potts (Gwyneth Paltrow) is back and helping Stark fight off comic book villain Black Widow (Scarlett Johansson). Sure, this one has a lot to live up to, but with Jon Favreau back at the helm, I think it’s in good hands.

This is absolutely no laughing matter. Russell Crowe and Ridley Scott are collaborating for a fifth time for the gritty, action-packed adaptation of the 1883 novel, The Merry Adventures of Robin Hood. Set in 13th century England, Cate Blanchett is a fair-skinned, dark-haired Maid Marian, and Crowe is ambitiously becoming the legendary figure known as a crusader for the poor and enemy of the infamous Sheriff of Nottingham.

There have been plenty of skits from the incredibly popular comedy show “Saturday Night Live” that have been made into feature films. Wayne’s World, anyone? The newest to join the list is MacGruber, a parody of the mid-’80s television show “MacGyver.” In this film, “SNL” cast members Will Forte, Kristen Wiig and Maya Rudolph reprise their roles from the skit as they take on arch-nemesis Val Kilmer. You can bet MacGruber’s homemade devices may not save him in this disaster.

Mike Myers, Cameron Diaz, Eddie Murphy, Antonio Banderas, Jon Hamm and the entire cast is back for a fourth installment of the films starring Myers as the green ogre. In this film, Shrek gets a taste of life in Far Far Away, a world where he does not exist and those around him are made miserable by the evil dictator Rumpelstiltskin. Everyone from Megan Fox to Justin Timberlake make guest voice appearances in this funny series that has become so beloved by kids and adults alike.