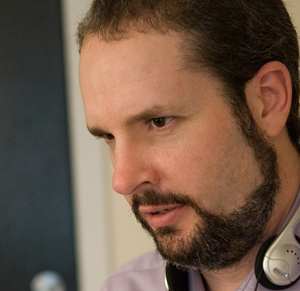 Peter Hanson on the set of Tales from the Script
(Credit: Paul Nissen)

How did you get the inspiration for this project?

I’ve been a writer and filmmaker throughout my whole career and have always tried to integrate those two aspects of my creative personality into everything I do. That’s why my first book was a study of the body of work of famous screenwriter Dalton Trumbo. So when Paul Herman, a Web designer I had worked with, shared his idea for a project about the rejection of the screenwriter’s experience, I thought that was a good starting place for an exploration for what screenwriters do. I took that idea and expanded it into what the project became in both its book and movie forms, which is a comprehensive discussion about everything screenwriters encounter in their pursuit of their careers.

How long did it take you to put it together?

The interviews took a year. I then spent a second year cutting and refining the movie both through editing and then based on feedback from festival screenings. The final step was four months writing the book, which was what I enjoyed because it was like a victory lap of a long project. So, start to finish the project took three years.

What are some of the most interesting things you learned during the process?

The prevailing theme of the interviews with the dozens of screenwriters is tenacity. What I learned is that it takes toughness of every conceivable kind to build and sustain a screenwriting career. In addition to overcoming all of the disappointment that they encounter while trying to become part of the industry, there are even more challenges in store once they are working, because their writing is so often changed on its way to becoming a movie. I learned anybody interested in the career has to have a very thick skin.

What were some of the hardest parts about making the film?

The artistic side is always incredibly enjoyable and I would never complain about the actual work of making the movie, but the challenge is making a living while investing such an enormous amount of time while making an artistic project. My challenge oddly enough paralleled the theme of the movie. Just as screenwriters make a deal with themselves that the adversity they will face is justified by the reward they are pursuing, I had to make a deal with myself that I was going to make whatever sacrifices were necessary to see this thing through to completion.

What is the best advice you heard?

I love to quote something that Paul Schrader, the screenwriter of Taxi Driver, says near the end of the film. He says, "If you, the viewer, can find any satisfaction in a field other than the arts, then you should do so." Because the only reason to pursue a career in the arts, given the slim chances of success, is that you have no other choice. I’m paraphrasing, but I think that echoes advice I have been given and have given for years. That the arts are such a tough road and no one has sympathy of people complaining about suffering in the arts that you have to do it because you love it.

Tales From the Script releases in select theaters March 19.