Devandra Banhart: Talks about School IDs, Being Homeless and Mothers 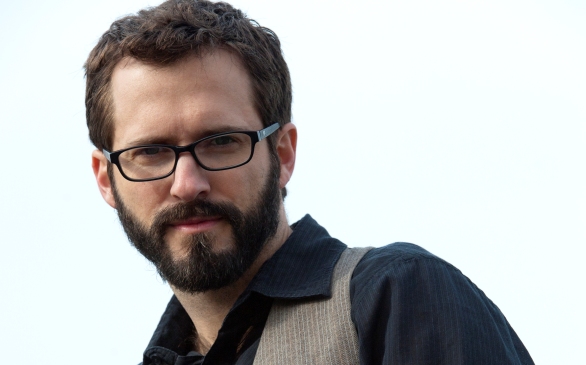 “Let’s share this useful and forgotten information with our brethren and sisters,” says Devendra Banhart.

He begins with the utmost sincerity, the best advice he can give any student leaving college: “Don’t forget that if you are going to drop out to keep your student ID.”

He still looks the same since dropping out of the San Francisco Art Institute, wearing a style of a shorter beard that makes him look like he was 18 again, with a little “lesbian librarian,” as he describes it, thrown in there.

It was mid-afternoon when I received a call from Banhart and his publicist. I had a brief session with the man whom the New York Times claims is at the forefront of the “freak folk” genre – a genre it describes as “willfully eccentric, arrangements toward the exotic, lyrics toward the oblique.”

Well, in Los Angeles, there is no need for such pedantic reconstruction by the Times. This genre that many see as pure indie is not only music, but a lifestyle. A lifestyle embodied by a man who seems to not pay too much attention to all the hype, is often times a little self-deprecating and is just having fun with it all.

In fact, to ask about Banhart’s inspiration for his new album, What Will We Be, is like falling deep into a rabbit hole of meaning.

“The goal is to be as inclusive as possible, almost all songs start with words and in that next step, in that arduous depressing painful, soul and vaginal castrating process of songwriting, the next step is to ask those words what you sound like,” he explains. “We have that palette of vocabulary to choose from, and sometimes they sound like white kids playing reggae in their garage. In fact, all our songs sound like white kids playing in their garage. Ironically, my music has gone from being in your kids’ demographics to those kids’ moms.”

He calls this the “Cool Mom” effect and hopes that I sign a petition for it to become a legitimate classification of music. It’s all very intriguing, since Banhart’s sound is no longer relegated to the underground college and hipster scene. It’s simply gone global with major record label Warner Bros. behind his new album.

Is this cause to be called a sellout? Some say so, but a change to bigger and better things isn’t always a bad thing.

Throughout all the playful banter, Banhart is fully aware of the beautiful and horrible irony to his success. Struggling musician is an understatement. At 20, Banhart was literally sleeping in squats and on subways in New York City.

“I was living in New York City as a busboy at a really nice vegetarian restaurant that was paying me nothing, and certainly I could not afford a room or a closet. I moved there to put out my first album on Young God Records. I met a guy at the Brooklyn free music festival who said, ‘Just give me 50 bucks, and I’ll give you the address to this squat.’”

He later had to borrow the 50 bucks from his record label and found his bed and all his stuff in the trash. Soon after he began his first tour with Entrance (who later changed their name to the Entrance Band) and has been touring ever since.

“I feel really bad for people who I hear being spotted at a coffee shop and given a record contract,” says Banhart. “Starting off playing anywhere, having absolutely no money, sleeping in a fucking subway or a squat, playing fucking anywhere, not having a publicist, not having a label, not having a booking agent – I worked for having those things. And now even this interview is a byproduct of making the music. I felt that was a very healthy trajectory.”

Banhart is currently touring big city venues all over the country. He doesn’t have a Twitter or Facebook, professing he’s a decade behind in technology, but you may be able to catch him after every show.

“I don’t just retreat backstage and abscond out in the back. I relax a little bit, change my freakin’ tampon, [then] go out on the floor. I try to talk to people and say thank you. I’m always surprised that anyone other than my mom is at the show. It’s not only my mom, but a lot of moms.”

What Will We Be is currently available. Devendra Banhart will perform March 24 at the Wiltern. For more information, visit myspace.com/devendrabanhart.