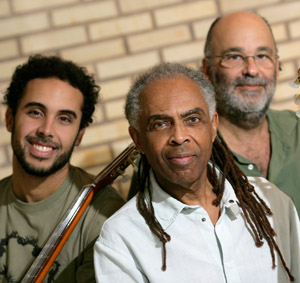 “There is no equivalent to Gilberto Gil in the English-speaking world. If you could find someone who mixed the politics of Nelson Mandela, the poetry of Bob Dylan, and was as popular as the Beatles, you still wouldn’t be close.” – London Jazz

The accomplishments of Gilberto Gil are practically too numerous to list in one article. With over 50 released recordings, he is easily among the most successful and celebrated Brazilian musicians of all time.

In a sense, his own career has reflected the developments and trends of Brazilian music during the last half-century. But Gil’s professional success is only part of the reason he has held such a special place in the hearts of the Brazilian public.

Born in 1942, Gil came of age during a time of political oppression. By the time he released his first album, the country was under the heel of a brutal dictatorship.

Gil and a group of singers and musicians, fellow founders of the “Tropicalia” musical movement, would not shy away from addressing political issues in their work. In 1969, Gil was arrested along with his contemporary Caetano Veloso and sent to prison. Gil would spend three months behind bars and four under house arrest before finally moving to London as a political refugee.

In certain ways, Gil’s exile would prove fortuitous as he was exposed to the music of Bob Marley and others. Gil even performed with the likes of Pink Floyd. In London, Gil began to develop an international following.

Upon his return to Brazil in 1972, Gil settled in Salvador, the city of his childhood in the northeastern state of Bahia. There he was re-inspired by the local music.

His albums during the ’70s reflected a blend of traditional Brazilian music and contemporary sounds. He also continued his political activism as an advocate for the environment and his involvement with the Filhos de Gandhy (Sons of Gandhi), the renowned all-black samba club. The latter commitment has brought Gil back to Salvador annually to take part in the city’s Carnaval celebration. In fact, it is direct from Salvador that Gil arrives this month for a couple of L.A. appearances.

Though he has mastered numerous instruments, his March 20 concert sees Gil on guitar accompanied by his son Bem Gil and renowned cellist Jacques Morelenbaum.

As a singer, Gil’s sound is distinct. Words are elongated and sung with multiple tones while interspersed with the occasional whoop and holler. Classic hits like “Lovacao” and “Drao” carry the tender and mournful quality of his voice.

Gil’s ability to capture a wide spectrum of human emotion is a huge part of the reason he has had such universal appeal. There is an unrestrained joyfulness to much of his music.

As a lyricist, his words are known for their playfulness and occasional absurdity. Humor is an essential component to much of his work.

Another aspect of Gil’s performance style is an emphasis on community. Invariably, Gil involves his audience in his shows, most of whom know his songs word for word. To attend one of his shows, you could easily feel that you are part of one big, warm Brazilian family.

When Gil takes the stage on March 20 at UCLA, it will be particularly momentous because of the long absence he has taken from international touring. In 2003, Gil took a job with the newly installed liberal government in Brazil under President Luiz Inácio Lula da Silva, a.k.a. “Lula.” His position was Minister of Culture, which Gil served for six years.

Many viewed his occupancy of the post as a triumph considering Gil’s activism and race. He is only one of a small handful of black politicians to ever serve in the government of the president. When Gil left the post in 2008, he cited as one of his principle reasons that he wanted to get back to doing what he loved: playing music.