Glitch In The Grid: Young Artists in the New American Recession

By Jeffrey and Eric Leiser 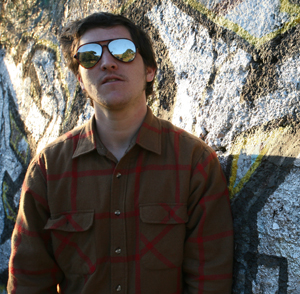 Jay Masonek in Jeffrey and Eric Leiser’s Glitch in the Grid
(Credit: Courtesy of Albino Fawn)

Glitch in the Grid is the upcoming third feature film by artist and filmmaker Eric Leiser, and the 22nd film collaboration with his brother, composer and writer Jeffrey Leiser. The brothers are best known for their last feature film, Imagination, about twins who are questionably diagnosed with Asperger’s Syndrome and the surreal world they inhabit. Now they’re back with Glitch in the Grid, a live-action and stop-motion project, which was shot and animated by Eric over the course of one year in Los Angeles, Sebastopol, New York, Hastings (England) and Rome, Italy.

Glitch in the Grid is about young artists dealing with life, love, work and weariness during the new American recession. The project began in response to a fallout with a shady producer in Los Angeles for a much larger film Jeffrey wrote, set in Iceland, and developed organically into a narrative feature about the journey and observation of young adults during the lowest economic period of our 20-something lives.

Jeffrey and Eric share some insights into the production with Campus Circle.

Glitch was born out of the idea to visit our melancholic, funny and talented cousin, artist Jay Masonek, in the Northern Californian town of Sebastopol and cheer him up during a dark time in his life, with the vague notion of taking him back to Hollywood to live and find acting work until he got on his feet.

It’s ironic that the film was produced in response to the very recession that serves as the backdrop of the film, though we weren’t going to let something like money keep us from starting another feature. What started out as an experimental travelogue soon turned on its hinges into the realm of introspective drama, as Jay begins to confront the real-life needs of adulthood and his own inner struggles as a human being. In effect, it became a spiritual journey less occupied with the day-to-day than with (both) the meaning and resonance of the human heart in a world it cannot hope to comprehend.

Jay, as portrayed in the film, is a semi-fictional character inspired by a real-life experience, as are our other “day players,” who are all 20-somethings. Erin, who plays the love interest, is an artist attending UCLA who, because of the job market, shares a one bedroom with her artistic, free-spirited sister Michelle and two other girls. In the film, she shares her own financial and personal struggles along with Jay’s own love of art, and the healing act of creating it. In one scene, shortly after they have met, they decide to paint a car in an attempt to create a large art piece. Jay poignantly paints the words “banned in LA” as the finishing touch, reflecting his unique sense of humor.

Another young actress in the film is Kalyn Hemphill, known as the recent winner of “Project Runway” (as the model) and “Models of the Runway.” She plays Jay’s mother in the 1980’s flashbacks, which help contextualize Jay’s experience. New to acting, Kalyn was very comfortable in front of the camera, open to collaboration and focused on creating an authentic, strong performance.

Through the use of stop-motion land animation, Eric aimed to capture the inner worlds of an individual outside, making for an original way of looking at real things in the physical and spiritual realm. As the landscape of Jay’s life changes throughout the film, so does the animation, surrealistically informing the film's narrative. Some of the animation took several entire days of strenuous labor in the English countryside in order to complete just one shot, making a difficult practice even more so – but not without amazing rewards.

The title Glitch in the Grid came from a term Jay penned himself in real life (and going several years back) for how he feels about himself, and we always found it thought-provoking, especially in a larger theological context. What we want to stress is that this grid is not all there is, that perhaps you don’t have to fit in at all. Perhaps you’re loved exactly where you are, and being different is a good thing if you know whom you’re doing it for.