Lakers Bounce Back From Road Slide 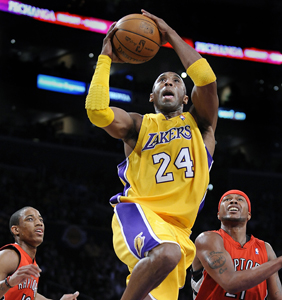 After experiencing a three-game losing streak on the road, the Los Angeles Lakers came back home. They needed this to happen because they earned a much-needed win against the visiting Toronto Raptors at Staples Center on March 11.

Los Angeles played a neck-to-neck affair, and it wasn’t until Kobe Bryant’s jump shot with less than two seconds remaining that lifted the Lake Show past the Canadian squad by a score of 109-107. For the contest, Bryant posted a game-high 32 points to go along with six rebounds and six assists. Bryant was 11-of-20 from the field and 10-of-11 from the charity stripe. And for the record, he closed the game for the Lakers yet another time.

“That’s my responsibility here, to close things out,” Bryant said to reporters after the triumph.

Center Andrew Bynum had a solid playing performance with 22 points and six rebounds, while forward Pau Gasol contributed 17 points and nine boards. The only other Laker in double figures was Lamar Odom (10 points), who also collected eight rebounds and dished five dimes.

“There were points in the game where I was very happy,” coach Phil Jackson said. “The aggressiveness, the defense.”

The victory over the Raptors was crucial to boost the confidence of Los Angeles because their next game was a road face-off against the Phoenix Suns. Los Angeles captured a convincing 102-96 win in which all Laker starters pitched in double figures, led by Bryant’s 21 points, 10 rebounds and seven assists.

For now, the Lakers possess the second-best record in the league (The Cavaliers have the best record.) and the top one in the Western Conference Standings. Both the Denver Nuggets and Dallas Mavericks trail Los Angeles by less than five games.

Up next for the Lakers is a home game versus the Minnesota Timberwolves Friday at 7:30 p.m. before they host the Washington Wizards Sunday at 6:30 p.m.