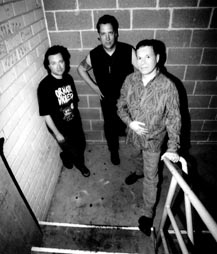 Is there a burden that comes with writing one of the most popular and catchy songs of the ’80s? “Yeah,” chuckles Violent Femmes bassist Brian Ritchie, “the burden of playing it every night.”

After 16 albums, including compilations, an anniversary edition of their debut, and an mp3-only release, the Femmes have created one of the most unique and recognizable sounds in modern pop music.

“When we started, we didn’t think there’d be any possibility for commercial success because this kind of music wasn’t successful,” continues Ritchie, who has five solo albums in additions to the Femmes’ catalog. “Our biggest influence was The Velvet Underground. They were never popular, so we just thought, ‘Well, they were never popular, why should we be popular?’ At the same time, we thought our music had a lot of appeal and that it was really poppy, but we just thought that it was going to get suppressed. We’ve been more successful than we would have anticipated.”

In 1982, after borrowing $10,000 from drummer Victor De Lorenzo’s dad, the trio, fronted by then 19-year-old vocalist Gordon Gano, went into a Wisconsin studio to record what would become their classic self-titled debut on Slash Records, the only company that would offer them a deal. After its release, the album went platinum.

“We were able to develop a large fan base by word of mouth,” says Ritchie, who was barely 20 when he co-founded the band in 1980 with De Lorenzo (who rejoined the band in 2002 after an almost decade long hiatus). “I think our first album was a big hit because a lot of [college radio] stations played all the songs from the album. People got to see that it was a solid effort, instead of just hearing one song – which is what happens now, if you’re lucky.”

With Rhino Records currently preparing to release the band’s greatest hits package and a DVD of videos and live footage in early 2005, the Femmes are spending their time playing as far and wide as possible.

“Our favorite thing is performing,” says Ritchie. “We’re fairly committed to doing a lot of shows and playing wherever people want to hear us. In just the last two or three years, we’ve played just about every country in Europe, Australia, New Zealand, all over America, all 50 states. I guess you could say we’re modern troubadours.”

While they’re not scheduled to perform on any of the politically themed tours aimed at the upcoming election, Ritchie supports the efforts whole-heartedly. “A lot of people say, ‘Oh, entertainers should keep their mouths shut. But they don’t know what they’re talking about,” he says.

“Entertainers are citizens and we have just as much a right to our opinion and to express it. The First Amendment and freedom of speech are some of the best things about America, so I’m all in favor of [bands getting involved politically], all the time.

“I have some pretty strong political feelings,” Ritchie adds, “but I don’t really feel the need or [have] the ability to express it on my instrument. How can you play a bass line that tells people that the president is a lying sack of shit? If I could do that, I would do it.” Regardless of the outcome this November, the Femmes will go on. “We’re gradually starting to explore the different options of what kind of recording we might want to make in the future,” says Ritchie. “We love playing music, that’s why we started doing it.”