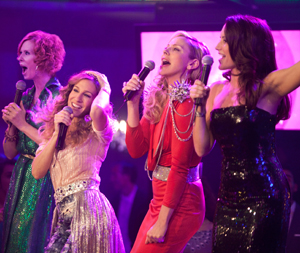 What if the
(Credit: New Line Cinema/MCT)

I rarely talk about television. Once in a blue moon something sparks my imagination to talk about TV, but for the most part, I mainly talk about the big screen.

If you haven’t noticed, one thing I find wildly amusing is coming up with really stupid ideas for projects that would never happen. Today I’ll be experimenting with the idea of the “crossover episode.”

Some TV shows that are part of the same series have cross over episodes like “CSI” or “Law & Order,” and now we’re beginning to see some films have crossover elements such as the new Marvel superhero movies like The Incredible Hulk and Iron Man. But I’m here to ask the eternal question, “What if?” with some suggestions for crossover episodes for television.

“The Sopranos” meets “Sex and the City”

In this episode, James Gandolfini’s Tony Soprano winds up having a steamy affair with Sarah Jessica Parker’s Carrie Bradshaw. It isn’t long before she brings her friends around, and before you know it, Samantha is having threeways with Silvio and Paulie Walnuts.

Like Carrie does with every other encounter she or any of her friends have, she writes a column about it. When she finds out who Tony is, she writes about what it’s like to sleep with a scary mob boss, completely without Tony’s permission.

As it turns out, Carmela reads Carrie’s column, and she doesn’t need Tony’s name mentioned in the article to know it’s him. Needless to say, she’s pissed. Really pissed. But not nearly as pissed off as Tony is.

In the middle of the night, Tony, Silvio and Paulie kidnap Carrie and the girls out of their apartments and take them to an abandoned warehouse. At this moment, if you were to turn the sound off and be real quiet, you would be able to hear the jaw of every woman in the world hit the floor at the same time as Tony and his pals whip out guns and execute Carrie, Samantha, Charlotte and Miranda.

But then, we drop the deus ex machina on everyone and cut to Carrie waking up out of a nightmare. No more ice cream right before bed for Carrie!

The episode opens with Heidi Klum and Tim Gunn announcing this week’s challenge to the designers. The challenge: Design a look for an actual street hooker. The winning designer will have their outfit worn by their respective hooker the next night they go to Hunts Point to turn tricks.

In a special episode of “Models of the Runway” that airs after that episode, a camera crew follows the hooker wearing the winning outfit around and interviews her as she turns tricks all night.

Jack Bauer walks into the bathroom, drops his pants and is just about to sit down on the toilet to take a dump, when CTU blows up his phone and demands that he come in to be briefed immediately about a new threat to national security. When Jack shows up, CTU tells him they’ve received top secret intel that a company called the Dharma Initiative is developing a weapon out on a remote island and that they’re going to use it on American soil against Americans.

The iconic “24 clock” continues ticking as Jack is dropped off on the island, but is thrown completely off when the island starts skipping through time. Now Jack has to navigate the island torturing any and all “Lost” cast members to find the Dharma Initiative’s secret weapon.

Along the way Jack runs into and befriends Sayid, and the two connect on their consistent need to torture people for information all the time. They begin looking forward to opportunities to torture someone for information and become competitive as they try to “out torture” each other.

A great friendship grows between them, and after the mission is over and they get back to the mainland, they open a store called “Jack & Sayid’s Torture Emporium” where they sell various books and paraphernalia pertaining to the love of – and the art of – torturing the crap out of someone to obtain information.