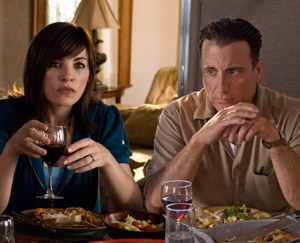 Every family has skeletons in its closet. If only those skeletons would come out of their respective closets and be put on comical display.

Perhaps Overture has uncovered those perfect skeletons and found a way to comically display how they bolt out of those proverbial closets, causing a riotous series of laughs in the process.

A tale of an everyday family with problems piling upon problems in the most hysterical of manners, City Island is a laugh-out-loud comedy incessantly making a humorous example of the Rizzo family. Struggling to make a living in one of New York City’s most inconspicuous enclaves of City Island, Vince Rizzo (Andy Garcia) is a prison guard and aspiring actor trying to do well for his family, which consists of his beautiful yet hot-tempered wife (Julianna Margulies), disinterested college-attending daughter (Dominik Garcia-Lorido) and rebellious son with a unique sex fetish.

While working his beat at a New York City prison, Rizzo comes across an interesting ex-con of an inmate – a long-lost son (Steven Strait) he never met whom he fathered with another lady prior to his current marriage. As Rizzo tries to come to terms with his own secrets – his acting classes at night and the story of his long-lost son – he ultimately realizes the equally gripping secrets closely held by everyone around him, including his wife, daughter, two sons and even his acting teacher (Alan Arkin) and classmate (Emily Mortimer).

When all the secrets collide and everyone’s proverbial skeletons pummel through closet doors, movie-going audiences will try hard to do anything else but laugh out loud – mostly because everyone will be able to relate to the not-so-odd secrets each of the film’s characters carry with them throughout the story.

Through the comical tale of secretive lives and dreams going haywire, City Island is ultimately a story of how, no matter how absurd or outlandish one’s secrets are (especially the ones kept hidden from family), no one is perfect – not even your loved ones. In the end, whether the secrets are held for good intentions or otherwise, the important thing is to treasure our loved ones for who they are, not for what they do not tell us.

With Garcia playing a convincing role as a common man with common problems and common dreams, City Island also introduces some fresh talent in the likes of Strait and Garcia-Lorido. Meanwhile, the film also balances itself out with stunningly solid and memorable supporting roles by Margulies, Mortimer and Arkin.