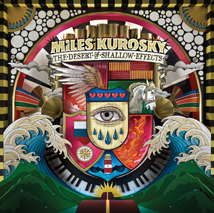 This solo debut was arranged with the assistance of more than 30 musicians and vocalists, adding touches like oboe, toy piano, accordion, pots and pans and finger snaps, Kurosky himself credited with the iron fist (sorry, Iron Fist) that holds the mess together in a single space.

Certainly, there’s a lot of Beulah on this record – namely, a good deal of work by multi-instrumentalist, vice-producer and ex-Beulah bassist Eli Crews, as well as drummer Daniel Sullivan, keyboard player Patrick Abernethy and guitar/keyboard player Pat Noel. And it seems Kurosky’s gone back on his lack of desire to perform under his own name. So, after multiple surgeries, a marriage, a bittersweet move in and out of L.A. and four years of song construction, here’s a post-Beulah Kurosky.

This is the much-expected pop record that makes up for Beulah’s breakup, which occurred just prior to bigger-is-better indie pop taking off halfway through the last decade. But the lyrics are the thing. “She Was My Dresden” is simple, and a love song of the more subtle variety, a bit of a heartbreaker upon closer look. Album conclusion “West Memphis Skyline,” like much of the record, reads like a story, a firsthand narrative that perhaps hits its high point at such: “He said it’s true that Jesus loves his sinners, but in the end it never really matters because He falls in love the same way as us, and if you think He feels no pain just wait ’til His heart breaks.” Where this leads? “I was stoned out in the avenues, but I still found my way back to you. Where nothing in this world really matters except the sound of my own heart’s patter.” Oh, swoon, collapse.


The Desert of Shallow Effects is currently available.
Article posted on 3/15/2010
This article has been viewed 1510 times.