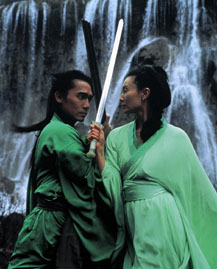 Zhang Yimou’s honor-and-action epic Hero shattered box-office records in China and topped the U.S. charts in its first two weeks of release in August. The film’s U.S. distributor, Miramax, looks golden after sitting on the film for more than a year.

But the soft-spoken Zhang sounds almost apologetic about his smash success.

“There’s no shame anymore for an artist to make commercial films in China,” Zhang said at the Toronto International Film Festival, where his new film, the kinetically dazzling House of Flying Daggers, had its North American premiere. “When I was a fresh graduate of film school, we all wanted to make artistic movies; we’re a bit snobbish in that way. We tended to look down at commercial entertainment.”

This attitude took a hit four years ago, when Crouching Tiger, Hidden Dragon emerged from the art houses to make $128 million in the America and grab four Oscars. Hong Kong action films already were popular in the United States, but this was something different: a mythical love story with jaw-dropping sights and a beating heart. The stateside triumph of Crouching Tiger helped alert Asian film industries that America could be a powerful distribution market, and American audiences are reaping the rewards. The Crouching Tiger effect that opened the U.S. market for Zhang also has seen an unprecedented number of Asian films gaining American distribution.

This year, there have been theatrical releases from Japan (Tokyo Godfather, Godzilla, The Twilight Samurai, The Blind Swordsman: Zatoichi, Ju-on: The Grudge and Ghost in the Shell 2); South Korea (Spring, Summer, Fall, Winter ... and Spring and Tae Guk Gi); Hong Kong (Shaolin Soccer and The Story of the Weeping Camel); and a pair of Chinese/Hong Kong co-productions (Zhou-Yu’s Train and Hero). This trend should increase during coming months.

But behind the scenes, the story is more complicated.

Zhang wrote the scripts for both Hero and Flying Daggers before Crouching Tiger was released, but Ang Lee beat him to the production punch. Things have since changed in mainland China’s movie industry. In the last few years, private funding has been on the rise, government control and censorship have declined, and Zhang has become a star.

The Toronto festival was a showcase for the shifts affecting many East Asian film industries – shifts that are having an impact in the United States.

And that’s good news for American moviegoers. Flying Daggers has wowed audiences on the festival circuit, but its real impact should be felt when it comes to U.S. theaters in December. Flying Daggers has the romance, mythical underpinnings and staggeringly imaginative set pieces that made Crouching Tiger a hot ticket. It may not make $128 million, but there’s no reason to think it won’t do well.

Toronto also brought signs of loosening content restrictions for Chinese film. Two Chinese films about modernization at this year’s festival – Liu Bingjian’s Plastic Flowers and Jia Zhang-ke’s The World – come from directors whose previous works were banned in China. But these films will show in their native land.

“They were previously considered black sheep in China,” Fulvi says of the directors. “The government is being more open-minded now.”

Maybe so. But the industry has a ways to go. According to The Times of London, of the 280 films made last year in China, only one in five made it to a theater. Money is still tight, as is screening space, and though censorship is loosening, it’s still a constant.

The healthiest East Asian film industry may be in South Korea, where there is little hesitation to seek mass appeal.

Five South Korean films made it to Toronto; one, Kim Ki-duk’s 3-Iron, was purchased by Sony Pictures Classics. Another, Old Boy, will be released in America by Tartan Films.

The grisly Old Boy fits the ultraviolent mold of many contemporary South Korean and Japanese films. It’s a tale of revenge and existential agony in which a businessman (Choi Min-sik) is abducted and kept in a private prison for 15 years. When he gets out, he’s obsessed with finding his captors – only to find that his hell is just beginning.

Filled with the kind of violent one-upmanship that American audiences associate with Quentin Tarantino, Old Boy, directed by Park Chan-wook, is disturbing and thrillingly cinematic.

“Korean films are very entertaining and fun to watch, but they also bring out Korea’s own traditions with a little bit of the Hollywood style,” says Chinese director Xiao Jiang, whose film Electric Shadows showed at the festival. “Korea is much further ahead than China in their movies.”

Indeed, South Korea is that rare country whose films regularly out-gross Hollywood imports. The highest-grossing Korean film of all time, the war epic Tae Guk Gi: The Brotherhood of War, is a sprawling, Hollywood-style saga that reflects increasing cross-pollination between Eastern and Western cinemas.

In the ’90s, Hong Kong directors such as John Woo and Tsui Hark began making movies in Hollywood. These days, Hollywood executives aren’t just interested in borrowing Asian filmmakers. They want the films as well.

And so Japanese filmmaker Takashi Shimizu has made an American version of his film The Grudge, starring Sarah Michelle Gellar, set to open Oct. 22. Another Japanese filmmaker, Hideo Nakata, steps behind the camera for an American remake of his The Ring 2, due next year. The Thai horror film The Eye and the Hong Kong cops thriller Infernal Affairs also are set for American remakes.

“Hollywood has started looking into other cultures and trying to find something good to bring in,” Zhang says. “It’s a good start. It also shows that Asian cultures have something to be extracted.”

But not all Asian filmmakers are onboard with the Americanization express. One of the best films in Toronto was Hirokazu Kore-eda’s Nobody Knows, based on the devastating true story of four siblings abandoned in a Tokyo apartment by their flighty mom. Eliciting sterling performances from child actors (including Yuya Yagira, who won the best actor prize at Cannes), Kore-eda has made a delicately powerful film reminiscent of the Japanese master Yasujiro Ozu.

Nobody Knows, like most of Kore-eda’s films, unfolds with sharp observations of Japanese domestic space and decorum. These are the kinds of intangible qualities that the director fears could get lost in Hollywood’s rush to remake Asian films.

“If it’s simply an Americanization of whatever exists in Asia, I think it’s unfortunate,” Kore-eda says. “If, in its collision with other cultures, Hollywood can genuinely be affected and influenced, that would be wonderful. But I don’t think that’s very likely.”