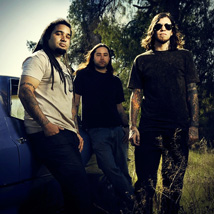 I’ll be the first to admit that Smile Empty Soul doesn’t make the kind of music I tend to listen to on a daily basis. I suppose my first clue should have come from the art on the liner notes, but I’ve come to learn that you really can’t judge an album by its cover. Well, and the mass appeal of the guitar riffs on More Anxiety have an undeniable mass appeal that gave me some hope upon my first casual listen. There’s something about Sean Danielsen’s vocals that meld so well with their Three Days Grace-like sound.

But I have to take issue with the lyrics, which are just self-pityingly emo. They’re filled with rage at everything and laced with references to recreational pharmaceuticals and self-harm.

But if you’re into that, then this is definitely the album for you. The “More” in the title? More Anxiety also includes a DVD with the music video and two-minute “Making of” for “Don’t Ever Leave.”

So is the album bad? Not really. The band itself is solid, even if it does sound a little too much like Seether for my enjoyment. It’s just not the type of music I’d listen to unless I was stood up at the altar or my best friend died. Or, I suppose, if I was just really goth.


More Anxiety is currently available.
Article posted on 3/15/2010
This article has been viewed 1444 times.