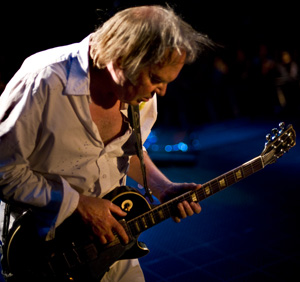 Versatile director Jonathan Demme returns with the second (after 2006’s Heart of Gold) in a planned trilogy of Neil Young concert films. Demme certainly understands his subject. Trunk Show is a diverse offering aimed at diehard fans, as opposed to those seeking a greatest hits sing along. Well-known tunes like “Oh Lonesome Me” stand alongside deep cuts like “Mexico” and “Ambulance Blues,” with special attention paid to the dichotomy at the heart of Young’s body of work.

Young has always been an artist of two extremes: the melancholy folk songs of albums like Harvest versus the blistering, dissonant jams of his work with Crazy Horse. Opening with the title track off Harvest, the film launches directly into the rocking “Cinnamon Girl.”

And fear not, the 64-year-old Young still can rock. In fact, one of the film’s shortcomings lies in Demme’s inability to rein in the guitarist’s rocking.

Demme’s camerawork is dynamic, the placement well conceived. The result is like being on stage with Young. Long takes allow the viewer to really appreciate the music and spend time with a musical icon rather than overwhelming with spectacle.

It is knowing when to cut that is Demme’s downfall here. A 20-minute jam out on “Show Me the Way” goes so far past self-indulgence as to stop the film dead. Worse is that it isn’t the film’s only such spotlight on Young’s insatiable thirst for dissonance. You tune out after a while and just start watching the sexagenarian rocker’s stringy hair blowing around.

In other places, Demme takes the editing to the opposite extreme, turning a straightforward concert into an Escher drawing through elliptical cuts. While intercutting the acoustic and electric sets offers a nice reprieve, periodic glimpses behind stage are unenlightening and all too brief. Ultimately, there are a lot of loose ends that just end up feeling haphazard.

There appears to be some greater concept behind the Trunk Show concert buried somewhere in the film. The idea of having a painter on stage, exploring artists in different mediums jamming, is an interesting one. But shots of the painter are treated as almost accidental. Is he creating these paintings live on stage or merely pretending?

The show’s concept is further obscured by Demme’s puzzling placement of the beginning of the concert during the film’s end credits, during which the character of the Sultan comes out to begin the proceedings with a gong hit. It leaves one feeling that Demme was either embarrassed by the whole concept or running damage control on a conceit that didn’t quite come off. In either case, he should have left all traces of it out of the film altogether.

Having made the landmark Talking Heads film Stop Making Sense, Demme is no stranger to concert films. His skill at bringing a performance to life is certainly on display here. He puts you up close and personal with Young’s craggy, caveman visage. For his part, Young comes through with a voice that sounds the same as it did 40 years ago. But as a film, Trunk Show feels disjointed and leaves one wanting.