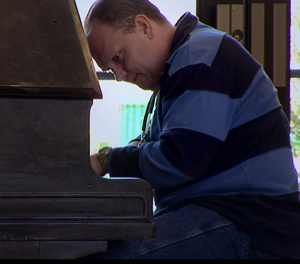 OK, class, quick allegorical reference check, who knows the Parable of the Prodigal Son? If you do, feel free to skip forward to the next paragraph. Basically, there are these two brothers, one who asks for his inheritance (while his dad’s still alive and kicking, no less) and blows all the money on a life of (I imagine) sex, drugs and rock ’n’ roll. When he returns home with his tail between his legs expecting a beating, his father instead welcomes him back with a party to celebrate his son’s return to his roots.

With this in mind, Kimberly Reed’s autobiographical documentary, Prodigal Sons, is more than aptly titled. It’s the story of the McKerrow brothers – Marc, Todd and Paul – as they find out who they really are as individuals and within their family.

The main focus is really on the dynamic between Marc and Paul. Marc was adopted and spent all of his life in the shadow of his little brother Paul, the popular high school valedictorian and football star. Marc, on the other hand, dropped out of high school and sustained a significant head injury at 21 that has resulted in mood swings and memory loss, as well as bouts of violence.

The pair had been estranged since high school, but both went back to their hometown in Montana for their 20-year high school reunion. Only in the interim, Paul became Kim (See? I told you it was autobiographical!) and did her best to bury her old life. Now, both Kim and Marc must redefine themselves so that Kim can finally reclaim the past that Marc seems to be stuck in.

Prodigal Sons is a moving tale of love and surprise. At first, I was surprised that it didn’t chronicle Paul’s transition into Kim at all, but in the end, that wasn’t the point. It’s about Kim accepting that her childhood shaped who she has become and Marc finding a sense of his own identity; it’s a touching, involving story that sucks you in.

Kim tells the story with a soft touch, deftly weaving Marc’s journey and her own. She shows the lessons learned from the sometimes frustrating situations they both find themselves in with such subtly that you’ll be left thinking about their life-changing experiences long after the film is finished.