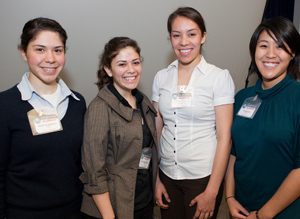 Students from CSULA at

Ten years ago, Elmira Agah moved to the United States from Iran as a descendant of a long line of male engineers, including her father, uncles and brothers. Coming from a high school that placed little emphasis on math and science, she is now in a position to interview for American’s leading defense military contractor, Raytheon.

In its efforts to engage American youth and women in the fields of math and science, Raytheon and the Society of Women Engineers (SWE) created an event for college students to tour the Raytheon facilities with an opportunity to individually shadow the company’s female engineers.

In her experiences studying engineering and working at NASA’s Jet Propulsion Laboratory, Agah recounts, “You don’t see too many women. Everything in regards to a female is treated in the same way [as a male], just their numbers are low.”

Raytheon’s “Shadow an Engineer” day was part of the company’s National Engineers Week, an annual event held the week after President’s Day in El Segundo.

“There is a difference when you tutor; guys are a lot more serious in wanting to solve the problems a lot of the time,” Agah says.

Generally, she saw that when she was in high school, there was a certain negative peer pressure for kids interested in math and science.

As an event organizer and Deputy Director at Raytheon, Noel Ellis discusses the lack of female role models as the reason for the large disparity between the sexes.

“What we’ve seen is families and cultures play a role. Students not having the role model and not understanding that math and science is important,” says Ellis.

He explains that it is in middle school where these biases are formed. In fact, according to Beyond Bias and Barriers: Fulfilling the Potential of Women in Academic Science and Engineering, the United States Academy of Sciences found that women generally decrease “at every educational transition;” this is proven by the number of professors employed in universities. Men outnumber women in engineering professorships by 21,500 (male) to 2,900 (female).

The Raytheon event was specifically designed to highlight female involvement in engineering. The engineer Agah shadowed had tasks in project management similar to her internship at NASA. Her tour of the different labs at a large-scale American defense corporation was also the perfect opportunity to network with a possible future employer.

Originally learning about the event at a career fair at UCLA, Agah was on the verge of graduating with her bachelor’s and looking for a full-time job. Having not heard from Raytheon about the status of her application, she found the event to be an opportunity to follow up.

Her mission was a success; she was able to get in touch with human resources and now has an interview pending. Though Ellis clearly clarifies that the event is not meant for recruiting new hires, he does agree that it is a great opportunity for networking.

With a large pool of applicants to choose from, engineering companies are now looking towards hiring younger engineers and recent graduates. The reasons include new areas of technology like alternative energy and Web-based systems that Generation X has grown up pioneering.

Fostering a larger interest in math and science will provide a larger, more diverse applicant pool for the future of science and engineering companies.

There was no general criterion for students participating in the event. Raytheon partnered with the SWE, a group dedicated to the advancement of women in engineering, to get the word out to interested students.

What was the only thing missing from the event?

“To see classified projects was not an option,” says Agah.