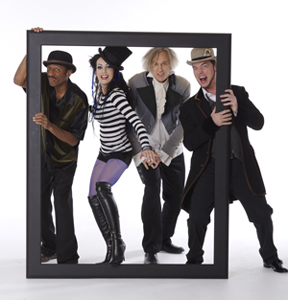 The path of the artist is a difficult one for anyone to tread. The uncertainty of acceptance, landing the next paid gig and measuring up to the hordes of others struggling for a piece of the pie evokes anxiety in even the most steeled veteran.

But for the deaf entertainer, that struggle for expression and acceptance is all the more trying. See What I’m Saying follows the lives of four deaf entertainers over the course of a year as they struggle to overcome marginalization and break through cultural barriers to bring their message and talents to a broader audience.

CJ Jones is an internationally acclaimed comedian within the worldwide deaf community, but as a virtual unknown to the mainstream, he has difficulty landing even the most trivial of acting roles. Robert DeMayo is an outstanding actor and teacher of stage sign language interpretation at Juilliard who faces homelessness, while Bob Hiltermann, a drummer in the world’s sole deaf rock band, battles his own insecurities as he puts together a showcase venture at the El Rey Theatre for his band, Beethoven’s Nightmare. TL Forsberg straddles the line as a hearing impaired singer who finds that she is not fully accepted by either the hearing or deaf communities.

A first, in that it is fully accessible to both the hard of hearing and the “signing-impaired,” See What I’m Saying goes one step farther by fully immersing the hearing in their world, fostering an understanding of the world as the deaf interpret it.

Over the course of a year, the four connect and share in each other’s falters and triumphs. Jones suffers a major letdown at a Black theatre festival, but rises above to put together the first Sign Language Theatre Festival in Los Angeles. Forsberg heads into the studio to record her first CD, Not Deaf Enough, and faces challenges of her own. DeMayo, despite his descent into life on the street, never loses hope and ultimately rises above while Hiltermann delights a crossover audience with his barrier-shattering rock show.

Can You See What I’m Saying is inspiring, but it goes beyond that: It is all-inclusive. The film avoids preaching and instead allows each individual to flourish and captivate with their story. Nobody here is made into a superhero, nor are they the classic underdog, and yet it is so immensely satisfying to see each talent succeed in the end. This is one that will leave the audience wanting more once the final credits roll.