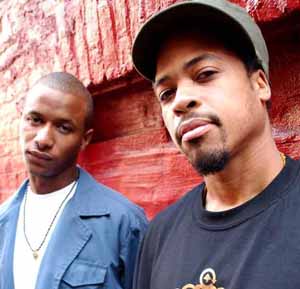 For the last date of their tour with SOJA, the veteran indie collection Zion I exploded on stage at HOB Sunset Strip with “Juicy Juice,” the first single from their latest LP, The Take Over. The heavy 808 knock got everybody’s necks on nod and from that moment, I could not have imaged how crazy this show was going to be.

Donning a fresh Caesar, Kumbi’s charisma oozed out of him like sweat in a polymeric workout as he brought a smoke-filled crowd to a feverish pitch. Calling Zumbi’s cohort AmpLive a producer would be doing him an injustice. This electronic artist played his MPC1000 (among other digital instruments) instead of just pressing play on each track. He even took to the stage with his MPC strapped to his shoulder and performed a classic hip-hop digital solo with samples, asking the crowd to chant, “Don’t stop, get it, get it!”

An unexpected treat was the soulful sounds of Corey Holiday, who showed his range of the entire musical scale. His voice had the audience in shock as he melodically added vocal notes throughout the set. For the closing song, the brass and percussion sections of SOJA joined in for a four-minute freestyle, which was the perfect exclamation point to end a long U.S. tour.