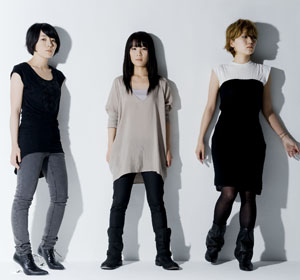 The all-girl rock-power trio known as Chatmonchy is already extremely popular in their native Japan where they’ve had multiple hit singles, sold out the famous Budokan arena and had their music featured in the Bleach anime series. Now a coordinated effort is being made to break the band in the states.

SIN, Sony Music’s Independent Network, has just released three Chatmonchy albums, Kokuhaku (confession), Miminari (ear ringing) and Seimeiryoku (life force) in the digital-only format, and the girls are making concert stops in a few major cities. Chatmonchy makes their stateside live debut this week as part of the Japan Nite festivities at South by Southwest in Austin before heading out on the Japan Nite Tour that stops at the Viper Room on March 27. They will also perform at Amoeba Music March 24.

Some of the acts that’ll appear on this year’s Lilith Tour, the festival created by Sarah McLachlan and formerly known as Lilith Fair, are: Kelly Clarkson, Ke$ha, Sia, Tegan and Sara, Cat Power, Sara Bareilles, Heart, Sugarland and Erykah Badu. Also slated to appear are Sheryl Crow, Nneka, Jill Scott, Norah Jones, Frazey Ford, Colbie Caillat, Ann Atomic, Kate Nash, Jesca Hoop, the Go-Go’s and dozens of others. The tour will have about 30 stops, including Los Angeles; dates and ticket prices will be announced soon at lilithfair.com.

The IFC channel is about to premiere an original series called “Dinner With the Band.” The program is a cooking show with a twist that’ll feature band members whipping up their favorite meals, sitting for interviews and performing, all in the casual atmosphere of the Brooklyn loft of chef and show host Sam Mason.

The “Dinner With the Band” episode featuring the Devil Makes Three is tentatively scheduled to air May 4, but you don’t have to wait that long to find out what they’ve got cookin’; catch the trio live at the Troubadour March 20.

Coco Wants it All Back

Los Angeles’ very own blues legend, Coco Montoya, is set to release a new album called I Want it All Back. Montoya is known worldwide as a top-notch guitar player having apprenticed with legends Albert Collins and John Mayall, but the new music is arranged to highlight his singing.

“People know where I’m at with the guitar but here the vocals are being concentrated on,” says Montoya, adding that having guitarist Keb’ Mo’ on board as band member and co-producer helped to get the best out of him. “I’ve been able to humble myself and take direction and guidance.”

I Want it All Back drops March 23 on the Ruf Records label and Montoya will be playing numerous southern California dates after his European tour ends later this month.

Filmed during the Warped Tour’s 15th Anniversary Birthday Bash, the HD DVD and CD compilation called Van’s Warped Tour 15th Anniversary Celebration drops March 30. The party was held at Club Nokia last fall, and the DVD chronicles all the action including performances by Bad Religion, Pete Wentz and the Decaydence All Stars, Underoath, Pennywise, Ozomatli, NOFX, Ice-T and the Aggrolites.

Archival footage and behind-the-scenes interview clips from the past decade and a half are also included. Fans that purchase Warped Tour tickets during the pre-sale on March 30 have the option of adding the DVD/CD to their shopping cart for an additional $15. 15th Anniversary Celebration will also be available for sale at all Warped Tour stops this summer.

You might say that the Freelance Whales are making a big “splash” on the indie scene; their just-released album Weathervane is blowing up all over the country. There’s a chance to see the big mammals before they swim to deeper seas though; they’ll be beaching for the evening at the Echo March 24.