Fatima Robinson: Movement from the Soul 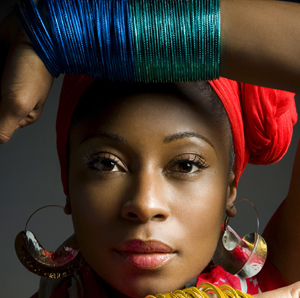 Since I was a young girl, my family was really encouraging about following my artistic aspirations and endeavors, and introducing me to all of the arts. I’ve been really lucky to be exposed to all sorts of dance, from classical ballet to modern funk.

Robinson has worked on projects like the Black Eyed Peas’ 2010 Grammy performance, Sade’s new video for “Soldier of Love,” films like Dreamgirls and the Oscars. I ask her if she has any preferences, and without hesitation she replies, “I approach a video very differently than I would something live for the stage. A video is always more complicated than the stage. You can really push it when you do music videos.”

I’m fascinated with the idea of hearing a song or a beat and then creating movement. I have to ask how that process even begins.

Robinson answers, “Sometimes I do it lyrically, where the words inspire me, but really it’s the rhythm that moves you.”

Robinson was recently working in Korea with the pop group sensation, the Wonder Girls, which proved to be more difficult than she imagined.

“I was in the studio with them, and doing a song in another language can be tricky. I have to first translate it to see the lyrics, and then organically go from there,” states Robinson.

The amazing thing about Robinson is that she had no formal dance training while growing up. Born in Little Rock, Ark., her mother moved her and her sister to Los Angeles at the age of four. She heard about an audition for a music video when she was 16, jumped on stage and won. The rest is history.

Robinson reminisces, “It was always hard for me to catch on to other people’s choreography, so I decided to do what was natural for my body. Going to the clubs was the best place to create. The music was loud, and it was free. Some people enjoy the structure of classes. It just wasn’t for me.”

She still continues to get inspired from the clubs and traveling the world.

“I’m really into dance music right now, electro music and African house music that’s big in London,” she says excitedly. “I’m just really interested with what’s going on in Europe right now. How the DJs can move the crowd the way that they do is fascinating.”

I also ask Robinson what she thinks of all the current dance shows on TV like “So You Think You Can Dance,” “America’s Best Dance Crew” and “Dancing with the Stars” (which she appeared on last season).

“All the dance shows are great,” she assures me. “Anything that keeps dance alive is exciting. They remind me of dance competitions in the clubs where the audience picks the winner rather than judges.”

Surprisingly, when she performed herself in front of an audience on “Dancing with the Stars,” she gained even more respect for her dancers after the experience.

“I hadn’t performed in a while,” she explains, “and as a choreographer you slowly stop dancing, because it becomes hard on the body. It’s like an athlete, and our bodies take a lot, but I definitely enjoy being in front of the camera every now and then.”

After working with so many people like Michael Jackson, Aaliyah and Will Smith, I ask Robinson where she wants to go next in her career. She reflects a moment and begins, “I wish more scripted shows had dance. I would love to choreograph a dance film, and not Fame!”

She continues, while chuckling, “They keep redoing Fame. There are other films out there. I just don’t get it. Let’s bring some other stories of dance to the big screen and even my story with a nontraditional approach and being successful in it.”

She also has advice for other dancers and people who want to get started: “Learn your craft, and hone what it is that you’re great at. Take a lot of dance classes at different dance studios. If you aren’t living in L.A. or N.Y. then move! Take classes and become the best dancer you can be.”

Interested parties can also take a dance class at her studio, Foresight Studios (3501 W. Sunset Blvd., Los Angeles), with choreographer Ryan Heffington, who is “all about having fun and letting go.”