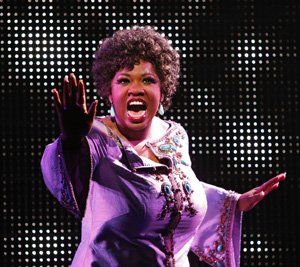 This is one of my favorite musicals of all time. It might be even my No. 1-ranked musical. Between the glamorous costumes, catchy songs and show-stopping classic, “And I Am Telling You I’m Not Going” sung by Effie, the audience is overwhelmed with emotion, from extreme highs to desperate lows.

We’ve seen this production in many forms – on Broadway with Jennifer Holliday as the original Effie and on screen with Beyoncé as Deena and Jennifer Hudson playing Effie. Each of these versions was fantastic for their own, unique reasons.

This one again raises the bar, adding screens, special effects and updated choreography by Shane Sparks of “So You Think You Can Dance.” Reality TV takes center stage once more, as Syesha Mercado, a second runner-up on the seventh season of “American Idol,” plays Deena. She’s sweet and can sing, though not as overwhelmingly powerful as Moya Angela’s Effie, which just may be the point considering the storyline.

“Dreamgirls” by itself is a captivating story about race, music, integrity, corruption, show business, deception, big dreams and dashed hopes. But the real reason to go is for the song and dance.

The list of heart-wrenching classics run right through to the end: “Cadillac Car,” “Steppin’ to the Bad Side,” “Heavy,” “I Am Changing,” “One Night Only” and “Listen.” Each has a momentum and a message that sweeps the crowd up into the life and times of the Dreams, a group loosely based on the Supremes.

Chester Gregory as James “Thunder” Early is fantastic as the James Brown-like soul brother, spinning, doing the splits and flopping on his knees as he screeches and adds sensuality to any song he delivers (against the wishes of his new management). Adrienne Warren also shines as Lorrell Robinson, the love interest of the married “Thunder” and the third Dream, who sticks it out until the end amid the drama.

Another awesome surprise is Chaz Lamar Shepherd as Curtis Taylor, Jr. Although a slightly crooked manager, his mellifluous voice almost makes you forgive him. And of course, “And I Am Telling You I’m Not Going,” the highlight of every “Dreamgirls” production, had the audience perpetually seeing stars.